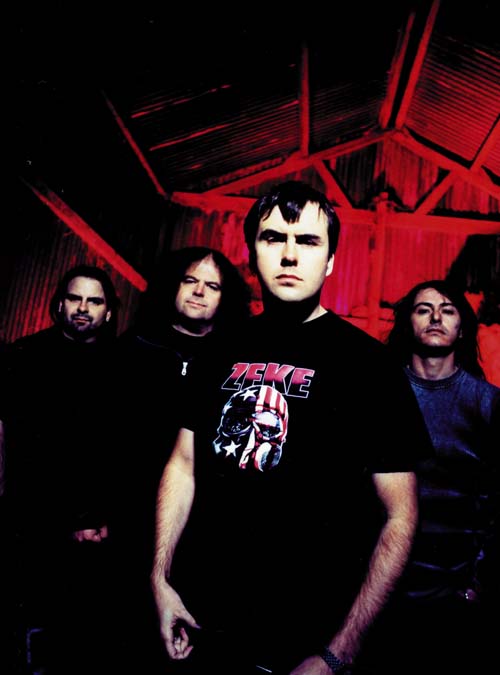 As band names go Napalm Death is near perfect in its simplicity.

No beating around the bush – in those two words it gave fair warning of just the sort of brutal aural blast that listeners were in for when the three Brummie bruisers it named almost single-handedly forged the ultra-distorted grindcore sound during the early 1980s.

Although, in a twist of metal myth often repeated, not one member remains from that pioneering line-up (at this point in time bassist Shane Embury is Napalm’s longest standing member, having served since ‘87), the quartet who continue to keep the Napalm name alive have never slacked in carrying its legacy of brutality into the new millennium. The mid-naughties were an industrious period, giving fans The Code Is Red… Long Live The Code in 2005, with twelfth original album Smear Campaign following a little over 12 months later. If you’re counting 2004’s Leaders Not Followers: Part 2, the second installment in the band’s extreme metal covers series, that’s three albums in as many years.

“There was no big masterplan about it, it was just we were on a roll creatively,” reckons vocalist and second eldest statesman of the band with 18 years service, Barney Greenway. “We spoke amongst ourselves and we felt that we did have it, and we were really excited to do another album so we just thought ‘why not? If what we’re thinking is looking pretty good then why not just do it?’”

In terms of releases, at least, the past two years have been comparatively barren, although Greenway is keen to point out that even when it appears that he, Embury, drummer Danny Herrera and guitarist Mitch Harris “aren’t doing much there’s always something going on in the background… we did a short European tour and started straight on the next album”. Time Waits For No Slave is due for release in January 09.

According to Embury in a rare recent interview this hiatus has afforded vital time to make space for friends and family, and for Greenway it seems to have provided some time for thought. He states on the band’s website that following Smear Campaign’s relentless attack on religion Time Waits will “strip it back and ask the question: why are we killing ourselves to get ahead and not appreciating the real beautiful things around us?”

All in all such talk of family and beauty doesn’t have quite the cutting edge of the gritty grindcore with which Napalm Death have long been synonymous, does it?

“Um, yeah a few people have made that observation,” admits Greenway, “but to me the tone, when you compare it to Smear Campaign, is no different really. Certainly there’s no difference in intensity, and the way I’m arriving at that conclusion basically is through looking at consumerism and how that shapes people. I think you could end up living your life always striving to keep up with the Joneses, get the status symbol and wake up one morning, close to not being around any more, and think ‘bloody hell – where did my life go?’ When I’m talking about beauty I’m talking about the natural world as one of my own anti-heroes Charles Darwin described it, and that in itself is a brutal world.”

Trace Napalm Death’s own evolution back and it does become hard to argue that this choice of subject matter is such a great departure. As influential as they have been in establishing the determinedly ugly sonic structures of extreme metal, the band in turn draw influence from the positive protest songs of Crass et al, frequently sharing stages with anarcho punk bands while grindcore was still in its infancy and promoters unsure of just what to do with them. Greenway, a vegetarian since his teens, concludes his online summation of Time Waits with the words “if that sounds hippy-ish, I don’t care.”

Today he sees fit to elaborate that “underneath the brutality of the sonics we’ve always been a band that’s talked about peace and pacifism and tolerance and I actually love that paradox; that I contribute to this form of music that sounds so off the rails yet, me as a person, I’m all about peace and tolerance, but also free thought and living life how you want to live it, not feeling bound by what society tells you.”

With this sentiment in mind Time Waits offers what could be considered a love song, Napalm style.

“Much of the subject matter here is very closely connected to the last album – religion does appear,” Greenway points out, “one particular song (‘Dictat’) is about marriage, because I think that marriage, or at least the concept of marriage, is in some ways a sham. There’s large pressures within society to conform to this set of guidelines and some of it to me seems so stringent that it takes the joy out of it. And love is supposed to be a joyful thing – about wild abandon, doing things that are bit dangerous, a bit heavy and all the better for it. People can’t live up to expectations and why should they? I mean, if you subscribe to the convention that is marriage it’s on your terms, what makes you happy and forget the moralistic idiots.”

Reluctant to give in to expectations or conventions on any level Time Waits is a record which, while “not hugely different in the whole sound,” as Greenway keenly stresses, “has its little nuances – the turn of a riff, the sequence of chords, the vocals… I use a lot more of what people might call the avant garde style of vocals with an influence from New York around the 1980s – things like Swans, My Bloody Valentine.”

That Greenway and band don’t play by the rules in the studio should be apparent from the simple fact that producer Russ Russell was employed on merit of being “one of the few who understand the band… I mean I do my vocals in an ordinary mic that I use onstage with a pair of Walkman headphones to monitor off. If you said that to most engineers they’d be like ‘what the hell are you doing?!’

“I joined Napalm to be in Napalm,” he continues, “I certainly didn’t join it to be a musician!”