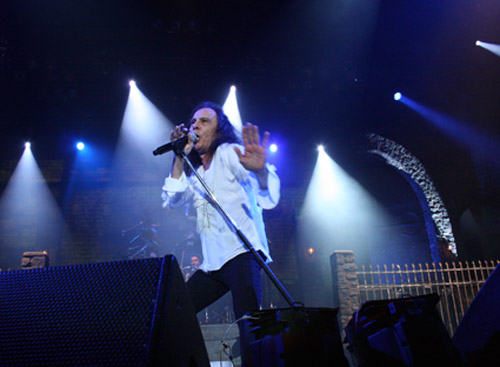 The status of ‘Rock ‘n’ Roll Royalty’ is conferred, these days, on any band that has managed to maintain the interest of their record label for more than six months. I heard the term applied to McFly recently, honest to God.

Ronnie James Dio is a vocalist with the blue blood of hard rock nobility coursing through his veins. Once memorably referred to as ‘that f**king four-foot yank’ by Ozzy Osbourne, the man he replaced in Black Sabbath, he had already made three era-defining albums with Ritchie Blackmore’s Rainbow when he joined Birmingham’s most celebrated satanic baby-eaters, and was about to produce another, Heaven & Hell.

This Sabbath line-up (re-branded for contractual reasons) has been touring the world’s arenas for months performing a set drawn exclusively from the three post-Ozzy albums they made together.

All that goat blood and human sacrifice has clearly worked wonders – the band may now qualify for their bus passes (Dio really does), but from a few rows back this could have been the Sabbath of 25 years ago, when the vinyl pressings of H&H were first flying out of the shops.

In truth, hard rock is a conservative church – the assembled greasers of all ages and every level of fiscal solvency, social rank and sobriety, knew exactly what they wanted: all the hits, the drum solos, the lightshow and the backdrops delivered with nary a hint of irony. This kind of audience – more like a host of orcs than an audience, actually – is not the Scissor Sisters’ natural constituency.

The band, wholly predictably, produced the goods in spades; not only looking but sounding exactly like their younger selves. Favouring darkly melodic material from the Heaven & Hell and The Mob Rules albums over the more conventionally metallic (and less good) Dehumanizer title, the show could, by a sterner critic than I, be described as a touch formulaic.

But bugger that sterner critic, it’s a good formula and I like it. So did the attendant black-clad faithful.