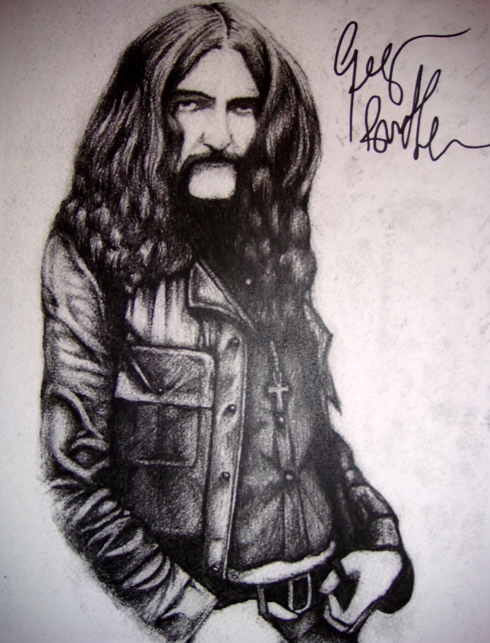 Not everyone is granted to see Black Sabbath with such ease ! being an Egyptian , living in the middle east and born on 25/05/1983, it literally took me almost 20 years to get to see my most favorite band live. Engraved within my own mind , body and soul , Black Sabbath’s music and lyrics have been such a huge influence and inspiration on the man I am today , there are no words that could tell or describe what Sabbath music means to me , its simply beyond any comprehension. I finally got to see my catch my first ever Sabbath show with Ronnie in Athens, Greece earlier that year specifically 1/7/2007 and to make a long story short , thanks to some friends which had some tight connections with the band’s management and quite close personal friends to Ronnie James Dio , I was more than fortunate and honored to be on the band’s guest list and along with my friends ,we had an unbelievable time together hanging out with Ronnie for over two hours backstage after such an incredible gig. But on 10/11/2007 at London’s Wembley , I was destined to witness one of the most memorable and treasured days of my all whole life ! already being quite enthusiastic to be seeing Ronnie with the Sabs again at the legendary Wembley arena ( which I only got to watch on DVD anyway !) I was really thrilled to see the band again for the 3rd time keeping my hopes high that I might be on the band’s guest list this evening as well. Since I knew the night was going to be really special , I worked on a modified artwork of Sabbath’s Heaven & Hell album replacing the old angel faces with Ronnie’s , Geezer’s and Tony’s ! I had the artwork customized on a very special shirts for me and my friends along with having a couple of them framed as gifts for Ronnie,Geezer and Iommi. To make a long story short , I lost my camera before the show and I wasn’t on the band’s guest list that night either ! after the show , my friends were backstage while I thought I would wait for them outside the venue since I had nothing to do back the hotel.Letting my friend notice that I will be waiting outside , I got an SMS from a friend backstage asking me to try and come around at parking area where he would try to let someone pick up inside.I rushed immediately out side the gated parking lot not believing that my fortunate could finally get a great twist on such a frustrating night so far. Waiting for almost two hours and watching Iommi and Geezer walking to their private buses from a distance tore my heart apart , I was getting depressed as time slipped by and I sadly knew that at least I wont be able to pass my special gifts to Tony or Geezer in person ! a few minutes later my heart almost pumped out of my chest as I spotted the band’s tour manager standing outside the fences parking gate chatting with some of his own friends , as he was approaching the parking lot again I called him out and he immediately recognized me from the long chat we had together back in Athens a few months back ! without uttering a single word he took me backstage and while we were walking I took out my gifts and asked if he could kindly pass these on to Tony and Geezer since I knew they’re already leaving quite soon , mesmerize ring to the beauty of my humbled artwork he showed the artworks to his tour assistant (no other than Pedro Howse) who looked straight to my eyes and asked me to follow him , I knew what was going to happen next but I just couldn’t help myself to take it for real , as we approached Iommi’ and Geezer’s private bus , Pedro asked to wait , he went inside with the gifts and a few minutes later the door opened and invited me to get in ! I can’t really tell what went through my mind cause the experience was way beyond to be grasped by any poor humanly brains ! I walked the corridor of the 5 star private bus where at the very end , the riff master Tony Iommi and the mighty Geezer Butler were sitting on their fancy rounded leather coaches and table , I got to introduce myself and had over 15 minutes of a very intimate chit chat with the two gentlemen who were more than kind signing my tour book and Heaven & Hell LP before Tony Iommi said ‘Mohammed , thank you very much’ we shook hands and I went down the bus almost fainting from such a holy personal experience with my all time favorite heroes. Later on I got to meet the sweetest , kindest and most humble man I’ve ever got to meet I smiled as Ronnie gave me one of his graceful hugs and kisses , signed my stuff , chatted with me for a while before heading straight to his bus wishing me all the best and hoping to see me on a show very soon. 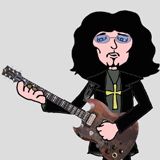