I grew up listening to Sabbath, and like so many other fans ended up playing the guitar. When I got my first job I knew that I had to get an SG, although a Gibson was far out of my reach. Through the ‘Buy and Sell’ I found an old beat up 1973 Mann SG in cherry red. Mann was a distributor for Ibanez in Canada, while they were in the business of ‘lawsuit’ guitars. Although Ibanez made some fantastic guitars back then, this was a budget model meant for beginners, which was perfect for me.

I learned alot and played it like mad, but ultimately the 21 fret bolt on neck left me frustrated and the sound of the fake humbuckers was less than inspiring ( they were actually single coils in a humbucker cover). In my youth I destroyed the guitar in an attempt to improve it, and with nothing left but the body put it away for years.

Years later I remembered it and decided to restore it in tribute to the great man, Mr.Iommi. My favorite guitar of his had always been his old Birch SG. Everyone has a ‘monkey’ tribute or an Old Boy, but the Birch was on some of my favorite albums. I bought a new neck and reworked the body and cutaways, converting it from a bolt on neck to a set/bolt on hybrid, bolts hidden by dowels. I constructed a pickguard and backplate of aluminum, in lieu of stainless steel, and a pickup plate as well. I added some engraving on the back just because.  I tried to find as many pictures of the guitar as possible to get it as close as I could, bevels, headstock shape, everything. I even sealed the 24 fret neck under countless coats of poly, as in the day.

Vintage John Birch parts are near impossible to find and very expensive. With this in mind I contacted John Birch and begged for a replacement stainless steel bridge. John Carling, who owns John Birch is a great gent, and agreed. It’s a great bridge, very solid and quite a unique design, vintage JB style. Thank you Mr.Carling! I have a reissue John Birch Magnum wound to 21k, and while it is a great pickup and I love it, it is constructed like a modern mini humbucker as opposed to the old style. Nothing wrong with that at all, just not right for this project. It has found a home in another guitar and sounds awesome!

The most exciting part of a Birch guitar for me is the pickups. Iommi had a powerful Magnum in the bridge, and a Hyperflux G in the neck. I got in touch with Jaydee Guitars to request some custom pickups. Jaydee still makes the old style pickups with the same specs as in the day. I requested an 18 pole Old Boy bridge pickup wound to 24K (Magnum specs). A first for them was my request of an Old Boy pickup in the style of a Hyperflux F, a pickup used by Ritchie Blackmore in his Birch made strat. It features 12 Alnico rod magnets, basically two strat style pickups inside the casing. I prefer a single coil type neck tone so I broke with authenticity here!

Jaydee are true craftsmen and the pickups do not disappoint. The Old Boy bridge pickup is ultra powerful, with a tight midrange tone that overdrives a tube amp very easily. The Old Boy neck pickup is one of a kind. It sounds clean and powerful, great for Hendrix and Blackmore type tones. They’re constructed with a stainless steel casing top and bottom, as opposes to just a nickel cover. The coils are baked in epoxy and the whole thing is feedback proof! I requested engraving on both of them for that vintage look, and they look amazing. The quality is the best I’ve ever seen and I cannot say enough good things about them, thank you Jaydee!

Having finished the guitar I looked for a case that would match it. I found a coffin case (chuckles), those old goofy cases for BC Rich guitars. In this case I think it fits pretty well! I’m no luthier and the results are less than perfect, but it has huge sentimental value. My first guitar, a cheap 1973 copy, reworked with the help of Birmingham’s finest! I feel very thankful!

If you’d like to see it in action, here it is being played on the classic track Junior’s Eyes:

Thanks for reading friends! \m/ 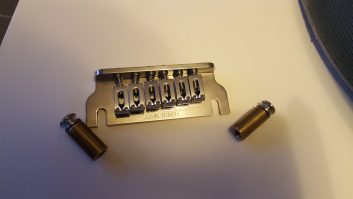 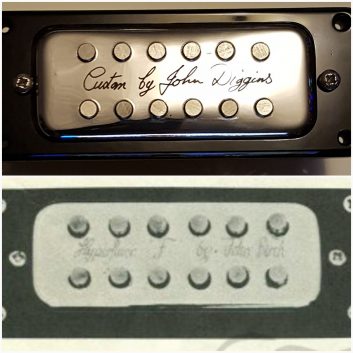 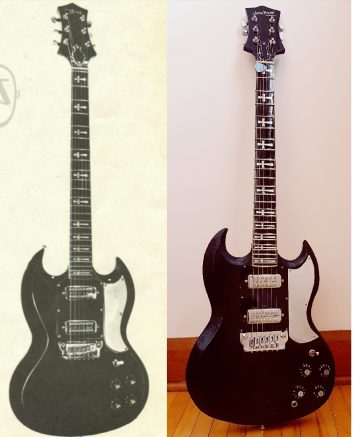 John Birch Iommi model from 1977 catalog and my tribute

Full aluminum backplate with engraving by yours truly

Lucifer. The sun the moon the stars. Please take my hand. 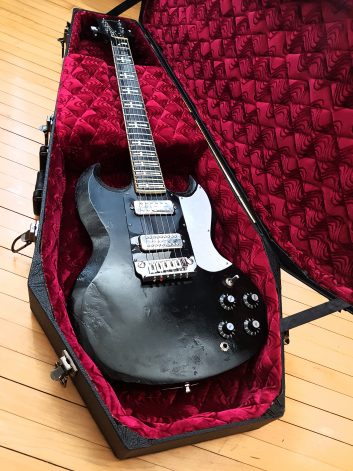