Why I Love Black Sabbath: Uniform 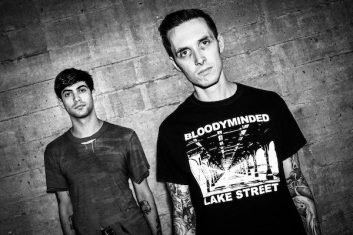 The influence of Black Sabbath and Birmingham & the Black Country’s musical heritage has spread far, far beyond the suburbs of the city, and continues to inspire new bands from around the world. New York industrial duo Uniform are a case in point, having covered Sabbath’s ‘Symptom Of The Universe’ in a very Godflesh-esque style on their new EP ‘Ghosthouse’. We got in touch with the band to find out why everything they do “would be nothing without Black Sabbath.”

Can you remember the first time you heard Black Sabbath? What kind of impact did it make
on you?

“Yes, I remember vividly. As a child of the 1980s and early 90s, my first exposure to most music was through MTV. All of the singles from Ozzy’s “No More Tears” album were put in heavy rotation and I became obsessed. From there, I started digging into Ozzy’s back catalogue and if I’m to be totally honest the first Sabbath songs I heard were through the medley of solo Ozzy band renditions of ‘Iron Man’, ‘Children Of The Grave’, and ‘Paranoid’ towards the end of the Randy Rhoads “Tribute” album. I picked up the “We Sold Our Souls for Rock ‘n’ Roll” compilation shortly thereafter and was completely floored. Ozzy’s renditions (even with Randy Rhoads) were rendered moot from that point on. They were too bright and polished. Once I heard Tony Iommi’s dismal guitar tone for the first time it was all over.”

“It can’t be understated, as they really are the godfathers of heavy music. Seriously, just about everything I love wouldn’t exist without Sabbath’s blues riffs from the bowels of hell and apocalyptic aesthetic. It is impossible to separate them from our songwriting lexicon, as they did it first and they did it better than everyone else. We might have a drum machine and get noisy at times, but at the end of the day we are a rock and roll band. Everything we do would be nothing without Black Sabbath.”

Why did you decide to cover ‘Symptom Of The Universe’ on your latest EP? What does the
song mean to you?

“Ben brought up the idea at practice one day and I jumped at it! The main riff on the original is one of the meanest pieces of recorded music on the planet, and we wanted to try to honor that somehow. It is a hard song to pull off without Bill Ward holding it down, but we did our best and we hope that we showed the source material the honor that it deserves. The lyrical themes of the song always struck me as greatly spiritual, which I dig. The universe is vast, all consuming, and beyond comprehension. By comparison, humanity is insignificant. The most magical, unifying thing we have in concert with the rest of creation is love.”

“That’s a hard question. For me, it really depends on the day. The band has experienced so many eras and explored so many styles that I can’t choose just one. Lately, I’ve been spinning more “Headless Cross” and “The Eternal Idol” than anything else. I love Tony Martin, man. He doesn’t get the credit he so richly deserves.”

Are there any other Birmingham based metal bands that have been a big inspiration on you?

“Oh, absolutely! Quartz, Ricochet, and Diamond Head are absolutely foundational. Also, this is the home of Witchfinder General, and a week doesn’t go by that I don’t listen to “Death Penalty”. Doom were one of the first extreme punk bands that I ever got into. Benediction were really important to me growing up and discovering death metal. Esoteric changed the way I thought about what doom could be. They are still one of my favorite bands. Outside of metal, I’d be lost without the without the works of Nikki Sudden and Epic Soundtracks, from Swell Maps onwards. Kinda can’t talk about Birmingham without talking about them.”

Do you think Birmingham and the Black Country get the credit they deserve for birthing bands like Sabbath, Judas Priest, Napalm Death, Godflesh etc?

“No, not at all. Most of the music from Birmingham, though sonically different, offers a kind of spirit unique to the location. Too often this music is just lumped together as “English” and left at that. The Birmingham spirit is something uniquely dark, powerful, and full of angry beauty.”

Did you ever get to see Black Sabbath live? If so, how was the experience?

“I did! In 1997 I saw Sabbath (minus Bill Ward) at the first Ozzfest. It was a dream come true. I remember that the Tony Martin Sabbath played with Motorhead not far from my house in 1995, but I didn’t get to go.”

Would you agree with the claim that Black Sabbath were the world’s first metal band, and
why?

“Absolutely. They broke the ground and set the bar. They defined what it meant to be a heavy, God fearing, working class band. Nothing against Zeppelin, but that is The Yardbirds. Heavy band, but not a metal band.There is something dirty and primal about Sabbath that had never been touched on before.”