Why I Love Black Sabbath: Memoriam 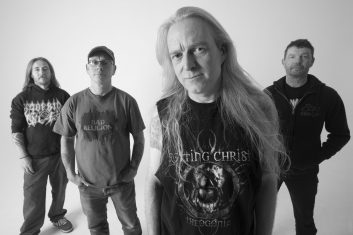 Having played bass in bands like Benediction, Sacrilege, Cerebral Fix and now Memoriam alongside ex-Bolt Thrower vocalist Karl Willetts, Frank Healy is a bonafide Birmingham legend and a mainstay of it’s metal scene to this day, with Memoriam’s debut album due early next year. We caught up with Frank to talk about the influence Birmingham has had on him, why the city is “ground zero” for metal and discover his favourite Black Sabbath album…

Do you feel like Birmingham has had an effect on the music you create, and if so, what is it about the city in particular? Could Memoriam have originated anywhere other than Birmingham?

“I don’t think consciously we are aware of an effect our city has on us but it must do really because your surroundings reflect through you, it’s a bit of a sprawling metropolis and quite claustrophobic in the centre which can be quite daunting to a stranger but it’s home to me! It was quite an industrial city when we were growing up, full of factories making a shitload of noise and spewing out smoke from their chimneys. I grew up waiting at the factory gates at the Cheneys factory with my mom and sister for the siren which signalled the end of the working day, watching this massive river of blokes pouring out and always getting excited seeing my dad in that crowd every single day, I was easily pleased!

“So using that memory as a yardstick with the noise, smog, cacophony etc I suppose my musical path was never going to involve stories of picking flowers on a majestic grass covered Turner painting style thing to some twee guitar picking. Throwing coal at the neighbouring kids at the old disused coal mine in Hamstead was more my thing. I honestly don’t think Memoriam could have come from anywhere else in my eyes. We are a typical musical result of Birmingham really; kids from working class families that went through all the power cuts and three day weeks. I think all this shows up in our music, that heavy grinding riff like the sound of a factory working its full load. That is Birmingham.”

“Yes I can, I was around ten/eleven years old round my best mate Brian Bradley’s house. His brother Tony and his mate John Howard, between them had every rock record you could think of back then. I liked Slade and T-Rex at the time. Tony would come home from work and relax by playing his guitar (he taught me my first chords and I never really stopped from there so thanks Tony, you are responsible for what I still do now). Then he would throw on a Led Zep, Yes, album or something which quietened us two youngsters down as we liked what we were hearing even back then. He noticed this and everyday he would play a different band for us to listen to. We came in from school one day and Tony was already home and blasting out this fantastic bit of noise I had never heard before, I just stood there listening to this song totally mesmerised by how something sounded so great and heavy. The song was ‘Snowblind’. Every time I hear it I am taken back to that moment that effectively started my obsession with Sabbath which has stayed steady and constant for over 40 years!”

“It is way up there. If you play the sort of music we do then Sabbath are the guvners. Every classic metal riff started with Tony Iommi, they cannot be bettered so the best anyone can do is their own take on that sound/riff. I’ve not heard anyone do this style of music any better anywhere. It’s what I aspire to still, to write that elusive new riff that Iommi knocks out on a day to day basis! And having all those albums as your teaching tools cannot be a bad thing in my eyes. Always imitated, never bettered.” 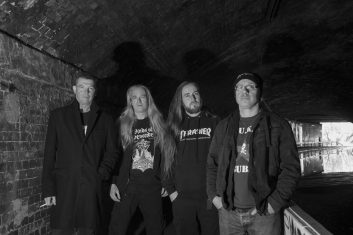 “‘Sabbath Bloody Sabbath’. Every single thing about that album I love. The cover, the layout. Not one duff track on this album, it just drips atmosphere, riffing and classic song structuring. Every Sabbath album ever has something great on it, but as
a whole collective – the one album ‘Sabbath Bloody Sabbath’ is the one for me. I never, ever get tired of playing it. The title track has everything as a template for the classic riff after riff after riff, a work of genius.”

Are there any other Birmingham based metal bands that have been a big inspiration on you?

“The standard ones really! Judas Priest, Led Zeppelin. Even the not so metal ones inspire me, The Move, ELO, Spencer Davis Group (my parents owned the house Stevie Winwood was born in!) Charged, GBH. I’m quite catholic in my musical tastes but metal and punk is still my main musical diet.”

Would you agree that Birmingham is the birthplace of metal? If so, do you think the city gets the credit it deserves for this?

“Just by the track record of bands you already know the answer to that! I honestly believe that Birmingham is ground zero for where metal came from. All over the world people know Birmingham as the metal hotbed… except for the Birmingham Council! When I was growing up one of the only places where people could get together, and the dj would play metal was firstly Bogarts which played rock and metal every night, the council hated the place and really went out of their way trying to get it shut down (they eventually did close it down), we moved on to The Golden Eagle then, and guess what? The council hated that venue as well and also succeeded in getting that closed down! I still have no idea why they hated the rock scene with such a vengeance that they felt we should not have our own clubs to get together, have a drink and listen to the music we love. I still hold a grudge against them now because of it.

“Nowadays it is a bit better, at least they are acknowledging what music made Birmingham with the Sabbath Stars on Broad Street, but I cannot understand what took them so long. In the 70/80s the Birmingham Odeon used to sell out every night with rock and metal bands so the money was there for them to make. Obviously Home Of Metal has made massive inroads in getting Birmingham on the map so that is a good thing. And long overdue!” 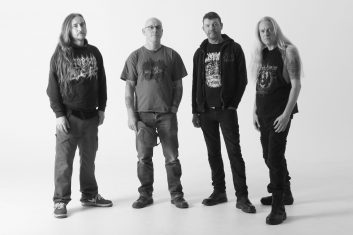 Did you ever get to see Black Sabbath live? If so, how was the experience?


“I’ve seen just about every line up of Sabbath live and enjoyed every one of them. The Ozzy and Dio ones were my favourites (as with most people I think). Just about every time was at the Birmingham Odeon as well; such a magical place that had a fantastic atmosphere. If you ask any metal band touring in those days, the Brum Odeon was the gig where you needed to be at your best because the crowds were very responsive to the bands back then. A Sabbath gig was also quite special though as it was a homecoming gig and the atmosphere was always electric. You could feel that something special was going to be happening every time they played there. As a band they were truly loved by us at that venue and they definitely upped their game when playing there. I cannot pick any particular one out as they all did the same thing to me, shivers down the spine and a loss of voice the next day! And they all smiled a lot.”

Would you agree with the claim that Black Sabbath were the world’s first metal band, and why?

“To me they are, go to any rock venue, festival, rock club anywhere in the world and ask the question “who was the first heavy metal band?”. Both you and I know what the majority of people will say. The first album came out and the world of music was changed forever. It was the first album that got worldwide recognition in the end of a new sort of music. To me that is all that needs to be said. I really cannot see a valid argument against Black Sabbath being the first. They just are!”

Huge thanks for your time Frank.
“No probs mate, and thanks to Home Of Metal for putting my name on the tea towel!”

Memoriam’s ‘The Hellfire Demos II’ is due to be released January 20th 2017 via Nuclear Blast, with the debut album ‘For The Fallen’ following later in the year