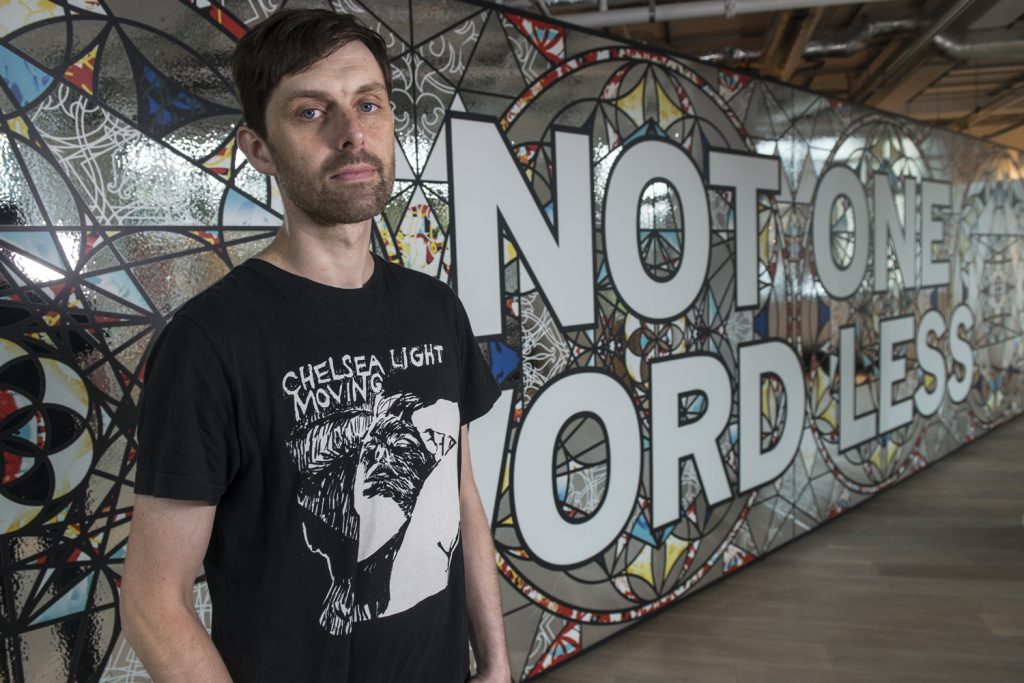 Mark Titchner is a London based artist who was nominated for the Turner Prize in 2006, and, like the rest of us, he loves Black Sabbath. In 2011, Mark presented the solo exhibition ‘Be True To Your Oblivion’ at The New Art Gallery Walsall, as part of the Home of Metal project, exploring themes of nihilism, empowerment and metal’s relationship to language. We caught up with Mark to find out more about the project, how he first discovered Black Sabbath and the wider effect metal has had on him as an artist.


Can you remember the first time you heard Black Sabbath? What kind of impact did it make on you?

“Hearing Black Sabbath for the first time was prefaced by rumours of how evil the band were, this was around the time of Ozzy’s bat biting antics, being devil worshippers or what not. It probably didn’t help that I’d seen a poster for ‘Born Again’ with its genuinely terrifying devil baby cover. So when I did hear the band finally on cheaply pressed 80’s collection it was with a slight sense of dread which to be honest the music did nothing to allay. The portal to some bleak aesthetic void.”

How important has the music of Black Sabbath been to your own artistic output?
“Well there are some direct influences such as borrowing lyrics for slogans or stealing the 70’s Vertigo label for sculptures but there main influence for me artistically is the idea of finding some kind of enlightenment in oblivion. There was a sense of  transcendental nihilism in their music that I found very powerful and importantly it was coming from a British, industrial setting that I could relate to.” 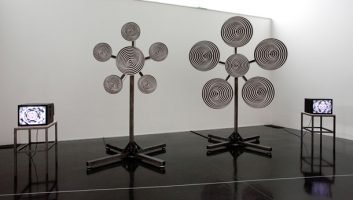 What can you tell us about your ‘BE TRUE TO YOUR OBLIVION’ exhibition, and how it explored the influence of heavy metal?
“For this exhibition I suppose I wanted to explore different areas of content that relate to the influence that heavy metal has had on me. I tried to avoid typical metal aesthetic props, no skulls or inverted crosses. So for instance I looked at the relationship that metal has to language; be that extreme vocal techniques, in my video portrait of Nic Bullen ’N(I)B’, or the cryptography of band logos in ‘Breeze Block’. Other works explored aesthetic influences that I identified in metal, such as nihilism, the occult, socialist politics, human rights, freedom and paganism. I didn’t flag it up as being a ‘metal show’ as such but its influence permeated all the works in the show.”

Are there any other Birmingham based metal bands that have been a big inspiration to you?
“Napalm Death definitely and to a lesser extent Godflesh. Though I’ve also stolen a few Priest lyrics along the way. Hearing the way that Napalm Death combined the extreme with a political and social engagement with the world was very important for me.” 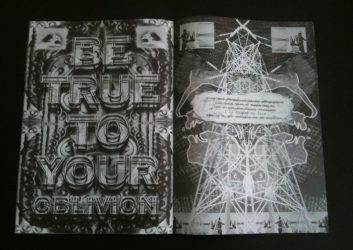 Do you think Birmingham gets the credit it deserves for birthing bands like Sabbath, Judas Priest, Napalm Death, Godflesh etc?
“Probably not, though I think Home of Metal as a project has done a lot to change this. There still seems to be a strange resistance to accepting Metal in the mainstream which is bizarre as some of the biggest bands in the world are metal acts. I suppose ultimately Metal is about some form of resistance so it’s is inevitably positioned outside of what is considered truly popular, acceptable or mainstream.”

Similarly, do you think metal gets enough credit for establishing such a unique, recognisable aesthetic? How was this aesthetic informed your own work?
“Again probably not. For me Metal has been a bit of gateway through which other influences have entered my life. As I say regarding ‘BE TRUE TO YOUR OBLIVION’ I see a wide range of aesthetics and content that metal connects with. Ultimately at it’s best metal is an expression of freedom and difference. A great big F U to the world!”

Did you ever get to see Black Sabbath live? If so, how was the experience?
“I was one of lucky people that due to some kind of booking mix up got a really cheap ticket to see them play in Hyde Park a few years ago. It was an incredibly hot day. I arrived just as Motörhead started playing in blazing sunshine. I was with a big group of friends enjoying the experience as we thought at the time it was the last Sabbath show, everyone singing along in communion until miraculously it started raining during ‘War Pigs’. A magical day.”

Would you agree with the claim that Black Sabbath were the world’s first metal band, and why?
“I’d probably agree, of course there were metal elements to contemporaries like Hawkwind, but Sabbath was the whole deal. The aesthetics, the sound and most importantly the doom!”