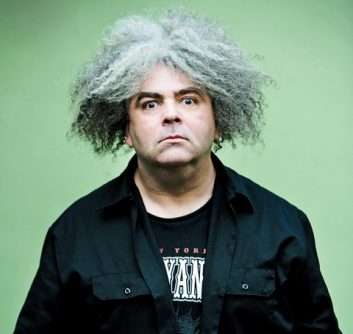 As one of the most notable disciples of sludgy, Sabbath derived riffery, guitarist/vocalist Roger “King Buzzo” Osborne has inspired millions with his band The Melvins, as well as collaborating with artists like Mike Patton, Tool, and Napalm Death’s Shane Embury in Venomous Concept, whilst his latest project, Crystal Fairy, sees him joining forces with members of The Mars Volta and Le Butcherettes. We caught up with Buzz to compare the Ozzy and Dio eras of the band, and discover why the first LP remains his favourite Black Sabbath album…

“I must have been about 13 when I first heard Black Sabbath and the song was ‘Electric Funeral’. It was really great! It sounded pretty evil to me which was a plus. Black Sabbath was one of many bands to make a lasting impression on my 13 year old mind. Another one was Alice Cooper.”

“I’d say they were fairly important but the list of influences musically for me is vast. They are one of about 1000.”

You’ve covered songs like ‘Into The Void’ and ‘Symptom Of The Universe’ with the Melvins in the past. Why did you pick these songs in particular, and what would you say they mean to you?

“I really dig those songs. I liked the music for ‘Into the Void’ more than the lyrics which sounded like they wrote them in about 10 minutes. That didn’t ruin the song by any means though, hell when you write something that good who cares about words? I always liked the riff for ‘Symptom Of The Universe’ and it was fun to figure out how to play it. Great drum part for that one as well and it was a lot of fun to screw around with. I’m not sure if we ever did that one live and I believe the recorded version we did eventually came out on a bootleg. Bootleggers… There’s never a time when you don’t just wish they were all dead.”

“The first one, because the song Black Sabbath is by far my favorite. That record is really powerful and simple sounding. I’ve never tired of that album.”

Are there any other Birmingham based metal bands that have been a big inspiration on you?
“By far my favorite Birmingham band is Judas Priest. I consider their album ‘Unleashed In The East’ to be the best metal album of all time. I know I know, this is about Sabbath but what can I say? I apologize but not really. I LOVE Sabbath and I really love the Dio version as well. Honestly I listen to the ‘Heaven And Hell’ album probably more than the other albums but it’s really not quite the same. It’s like two different bands. Two different bands that I can like. There’s not enough good bands to be that picky.”

Do any of these bands continue to influence the music you’re making today? How about your new project, Crystal Fairy?
“Priest and Sabbath have always been influential on us since the beginning. I’ve been attracted to the rebel nature of heavy metal since day one. A lot of my contemporaries have a problem with metal that I’ve never understood. There’s no redeeming social value to heavy metal and there shouldn’t be. The second you start mixing that sort of bullshit into that kind of music you’ve ruined it. I don’t need to have it explained to me and I certainly don’t want some boring message screamed at me at 125db. None of these bands are Bob Dylan. Good.

“Crystal Fairy is a new band Dale and I have with Teri Gender Bender [Le Butcherettes] and Omar Rodriguez [The Mars Volta]. We have a new album that hits the streets at the end of February. I’m very excited about this. We had a great experience working with these two and look forward to finally playing live with them.”

Would you agree that Birmingham is the birthplace of metal? If so, do you think the city gets the credit it deserves for this?
“Who knows. There seems to be a lot of good music that’s originated in Birmingham and that’s good enough for me.”

Would you agree with the claim that Black Sabbath were the world’s first metal band, and why?
“That’s difficult to say. As much as I dig Sabbath I’ve kind of always felt Blue Cheer were the first metal band but I could be wrong. God, don’t make me pick between those two. Who’s more significant, Blue Cheer or Black Sabbath? They’re both mind blowing and I could never decide. We played with Blue Cheer not long before Dickie Peterson died and it remains one of my fondest rock and roll memories. I love both bands music and I feel fortunate that I’m a fan. It’s a blessing.”

‘Crystal Fairy’ is released via Ipecac Recordings on February 24th

You can find Crystal Fairy and The Melvins on Facebook