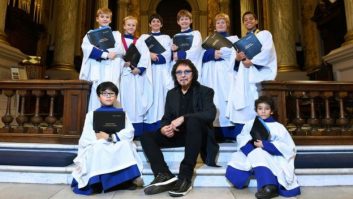 Black Sabbath guitarist Tony Iommi has written a new piece of choral music for Birmingham Cathedral, the five minute ‘How Good It Is’, which Tony claims is “just a little bit different to Sabbath”.

Tony had become friends with Dean of Birmingham, the Very Reverend Catherine Ogle, during his initial cancer scare in 2012, and wrote the song as a way of giving something back to the city he grew up in.

“Tony and I were introduced by a mutual friend and we discussed a possible music collaboration sometime in the future,” said the Dean in a recent BBC interview.

“Then, when Tony was unwell, we got to know one another better when I began to pray for him and kept in touch with Tony and his wife about his health. This is a most wonderful gift Tony offered to the cathedral.”

Though somewhat of a departure from his usual distorted style on the surface, ‘How Good It Is’ is unmistakably the work of Iommi, with his trademark bluesy licks trading off against choral elegies in a particularly ominous and very metal manner, and is highly reminiscent of softer Black Sabbath interludes like ‘Laguna Sunrise’ or ‘Fluff’.

Lyrically, the song is an ode to people living together in unity, which “is what Birmingham is all about” according to Dean Ogle.

You can listen to ‘How Good It Is’ in full below: