Tony Iommi on The End Tour and his battle with cancer 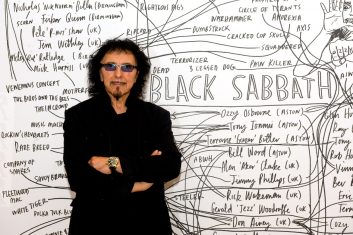 In a recent interview with Ultimate Classic Rock [link], Black Sabbath guitarist Tony Iommi delivered the fantastic news that his cancer has gone into remission, in addition to speaking about The End Tour.

“It’s very nostalgic,” he says, “because it really is that last tour. As far as any more dates, no, that won’t happen. I get really tired now with all the traveling. It’s just not good for me to be flying all around. I start getting pain where I had cancer in the lymph nodes. We have to draw the line somewhere and end it.”

Though the band weren’t certain the tour would end in Birmingham, the Home of Metal itself, to begin with, Iommi says the  band “thought it would be nice if we could end there because that’s where we started, but it just worked out.”

“Those first club shows we did, well … [Laughs] That was a long time ago,” he continues. “Back then, you were excited just to be able to play somewhere. Just to get a gig was amazing, because in Birmingham places to play were few and far between. And our music was quite different from anything that was around then so we had to build up pockets of followers. It was difficult, but the pockets we built up were brilliant and they lasted.”

Not only have those pockets of followers lasted, but they’ve grown exponentially since the band’s early shows, and their two final shows in Birmingham on February 2nd and 4th 2017 will be to a much larger group of fans.

We’re calling on you to help us document this historic occasion, and if any of you have shots from Black Sabbath’s early club shows, don’t forget to upload them to our archive.