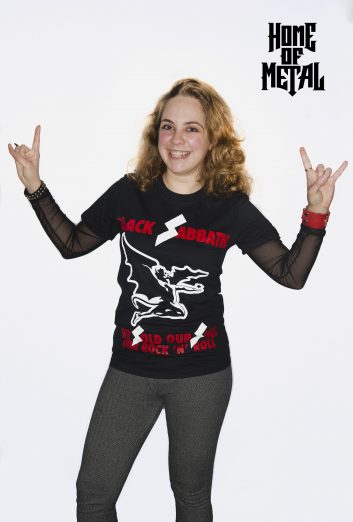 Continuing on with our Black Sabbath oral histories, today we have part 2 from Asya Draganova a Bulgarian Musician & Lecturer in Media & Communications working at Birmingham City University. Here Asya talks about her favourite Black Sabbath song and some important memorabilia she’s held on to for many years.

“That ticket for me, apart from being the ticket from the first big show I ever went to, and the only show that Black Sabbath ever made in Bulgaria, is also a memory of a previous and older finished era in the history of music. Which is still important to because you have this physical ticket which does not have a barcode, you can’t go to your mailbox and download as a pdf. & print it again – it’s one and only – and all these little rips and scratches, I know they happened while I was at that gig.”

And she talks ‘The End’ (or not?) of Black Sabbath:

“I just don’t seem to be necessarily seeing ‘The End’ really as ‘The End’. Not at all. Because, for me, Sabbath, since the moment I discovered them as a teenager & became more distinctively a Sabbath fan, has been a trajectory. It is very difficult to put a beginning to it, but also an end – so there is no end for me.”