The Future of Birmingham Metal 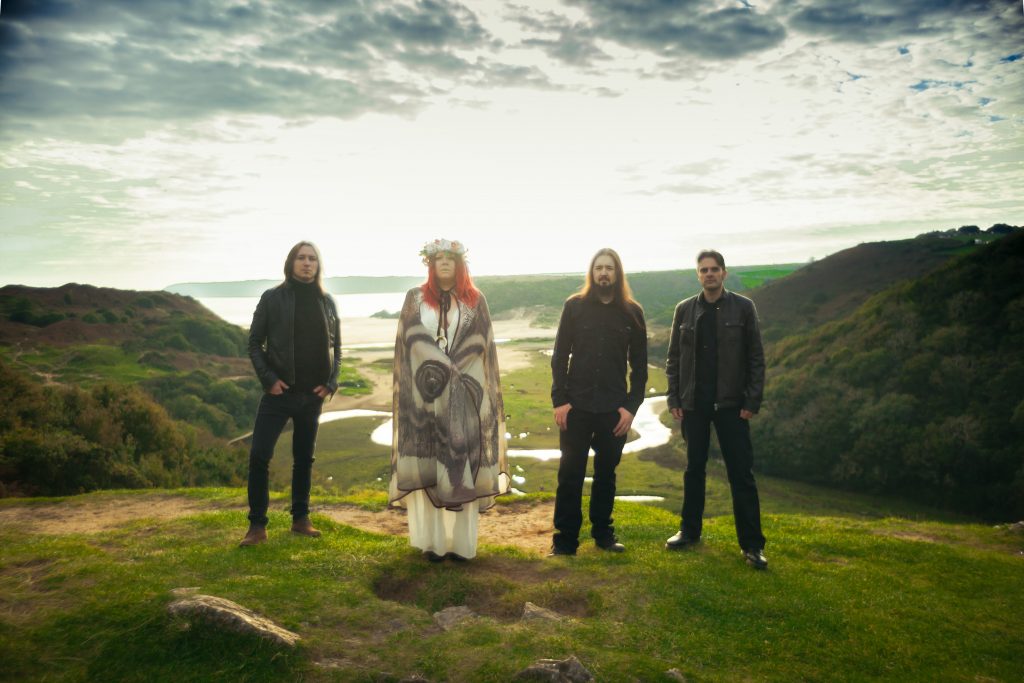 Black Sabbath may have called it a day, but their enduring legacy and Birmingham’s status as the Home of Metal aren’t going anywhere. With the allure of Sabbathian heritage still drawing thousands of tourists to the city, and local pioneers like Napalm Death and Godflesh still going strong, Birmingham’s metal credentials have never been in question, but the city’s vibrant metal scene has more to offer than just nostalgia. Here’s a quick look at some of the newer bands that are continuing to keep Birminghams’ metal torch burning for years to come…

Loyal students of the Iommi school of riff-craft, Alunah have been creating hazy, melancholic doom metal for over a decade now, with previous albums like 2012’s ‘White Hoarhound’ and 2014’s ‘Awakening The Forest’ combining dense, ‘Master Of Reality’-esque riffs with guitarist Sophie Day’s mournful, ethereal voice and a knack for infectious melodies. Latest LP ‘Solennial’ ventures further down this path whilst elaborating on the quartet’s pastoral, folky tendencies to create their most eerie, mature and touching opus to date, with songs like ‘Fire Of Thornborough Henge’ breaking new ground for the group.

Following in similarly doom-laden footsteps, Kroh made a big impression with last year’s epic ‘Altars’ opus. Originally formed back in 2011 as a side-project for Fukpig/ex-Mistress guitarist Paul Kenney’s more melodic ideas, the project has taken on a life of it’s own in recent years, blossoming into a full band set-up and bolstered by Oliwia Sobieszek’s soaring, emotive vocals. Kroh’s take on doom metal is grandiose yet anthemic, with songs like the unstoppably catchy ‘Living Water’ already becoming firm live favourites.

BURDEN OF THE NOOSE

In addition to Kroh, bassist Darren Donovan and drummer Rychard Stanton also play in Burden Of The Noose, forging a sludgier, murkier, and altogether filthier sound that has more in common with the likes of Iron Monkey or Eyehategod. The quintet’s new EP ‘Baphomet’ is a great representation of their sound, as guitarists Scott Cooper and Ed Chester’s hefty, tar thick riffs and Andrew Barraclough’s tortured shriek collide with high-octane punk tempos and irrestibly slimy grooves (just check out the aptly titled ‘Deaf And Insane’), but to get the full Burden experience, we urge you to go seem live; if you survive to tell the tale, you certainly won’t regret it…

Of course, we can’t talk about Black Country sludge metal without mentioning Opium Lord. The Stourbridge five-piece offered up a very distinctive, unique sound on 2015’s ‘The Calendrical Cycle: Eye Of Earth’, with their swinging, jazzy rhythms, dualing discordant guitars and elements of post-metal, math rock and post-punk churning away amongst their bleak, sickeningly heavy riffery. Last year, the band expanded their sound into ever more expressive and inventive territory on a split 7 inch with America’s Churchburn, and it’ll be interesting to see where they go with this style next. Definitely keep an ear out for these guys if you’re after something that’s as cerebral as it is physically crushing.

Birmingham’s metal scene doesn’t begin and end with doom, however; as you’d expect from the city that birthed Napalm Death and Benediction, there’s a fair share of more extreme metal here too, and they don’t come more extreme than Anaal Nathrakh. Though their live lineup has expanded to include members of fellow Brummie bruisers like Hordes, Fukpig, Vicious Bastard and Binah, the core of the band is comprised of just two members: guitarist Mick Kenney and vocalist Dave Hunt. Since forming back in 1999, the pair have continuously pushed their sound to see just how extreme they can make it, with last year’s ‘The Whole Of The Law’ LP stirring up elements of grindcore, black metal, gabber, harsh noise and the anxiety and existential dread that comes from city living into one astonishingly volatile cocktail.

Whilst Benediction may not have released any new material since 2008’s ‘Killing Music’, bassist Frank Healy has been busy with other projects, most notably Memoriam alongside former Bolt Thrower members Karl Willetts and Andrew Whale.

“I honestly believe that Birmingham is ground zero for where metal came from. All over the world people know Birmingham as the metal hotbed… except for the Birmingham Council!” chuckles Frank, although one listen to Memoriam’s incendiary debut ‘For The Fallen’ would no doubt change their minds. “I don’t think consciously we are aware of an effect our city has on us but it must do really because your surroundings reflect through you, it’s a bit of a sprawling metropolis and quite claustrophobic in the centre which can be quite daunting to a stranger but it’s home to me,” he continues. “I honestly don’t think Memoriam could have come from anywhere else in my eyes. We are a typical musical result of Birmingham really; kids from working class families that went through all the power cuts and three day weeks. I think all this shows up in our music, that heavy grinding riff like the sound of a factory working its full load. That is Birmingham.”

Memoriam aren’t the only ones flying the flag for old school death metal in Birmingham either, with Absolution offering up a gloriously grotesque platter of splatter on debut EP ‘Temptations Of The Flesh’. The band were formed in the early ’90s with Benediction’s Paul Adams on bass, but broke up after recording just one demo – thankfully, guitarist Rich Harwood and vocalist Neil Hadden (ex-Cerebral Fix) reconvened in 2012, with their EP arriving just last year.

“Birmingham and the West Midlands is a gritty industrial concrete jungle, it’s not a pretty place is it?” Neil laughs when asked how the city has shaped their sound. “Forming the band with an ex-member of Benediction obviously had a big impact on our sound. Bolt Thrower had a huge impact as well as they let us support them on quite a few gigs. The local scene in the ’80s and early ’90s had numerous bands that led the way in the heavier genres with the likes of Sacrilege, Napalm Death, Godflesh, Cerebral Fix and punk legends GBH.” “We are massively influenced by UB40 for their double bass and skank beat rythyms,” grins guitarist Adam Jenkins. “Joking apart there are a ton of local bands that have either infuenced us or helped us out along the way. Big shout out to Selfless – if Chris hadn’t nagged Neil and Rich about reforming and then having us support them afterwards the band might not be here.” Whilst Adam claims “Brum is the greatest city on earth and we are suitably blessed with a killer metal heritage,” Neil reckons that “the Birmingham scene has always been a strange one. For the second biggest city, attendances have been been hit and miss for years. I believe it’s a generation thing. Social interaction has changed, it’s getting the younger fans out from in front of the internet. When I started going out in the late ’80s, the average crowd age at smaller gigs was probably early twenties but now it’s in the thirties with quite a few of us in our forties. That said, there’s great bands around at the moment and there has been some brilliant underground promoters in recent years who have done a great job considering.”

There’s no denying the impact of Napalm Death’s death metal era (especially on America’s nascent extreme music scene), but the band are mostly known for pioneering grindcore with albums like 1988’s ‘From Enslavement To Obliteration’ and their ’87 debut, ‘Scum’. Bassist/vocalist Nic Bullen played on that album’s groundbreaking A-side before moving on to different sonic pastures, always challenging himself with a particularly varied musical output. Currently, he’s playing in Rainbow Grave alongside Johnny Doom, a searingly intense noise rock collective that veers between abrasive shards of Brainbombs-esque guitar histrionics and crushing, semi-industrial dirges not unlike that of former bandmate Justin Broadrick’s Godflesh project.

Speaking of Godflesh, any Justin Broadrick fans in attendance are advised to check out industrial metal duo Khost – Justin was so impressed by the ominous, suffocating atmosphere of albums like ‘Corrosive Shroud’ and ‘Copper Lock Hell’, he teamed up with the pair for a recent remix EP on Cold Spring Records. Whilst Khost’s use of manipulated field recordings and found footage lends their sound a certain exotic feel, their oppressive industrial clout has a distinct Birmingham flavour, and fits quite snugly into the city’s lineage of heavy, forward thinking artists.

HOOKED ON CHRIST
Taking influence from those early Napalm Death albums, Smethwick duo Hooked On Christ play fast, short and utterly furious grindcore. Sure, there’s a big influence from US hardcore in their sound too, but songs like ‘Fuck The Spoils’ combine working class frustration with that characteristic Brummie sense of humour, and a raging energy that would have done Napalm proud. With split releases with Belgium’s Prisoner 639 and Portsmouth’s Hack Job on the horizon, this two-piece are keeping Birmingham on the grindcore map in style.