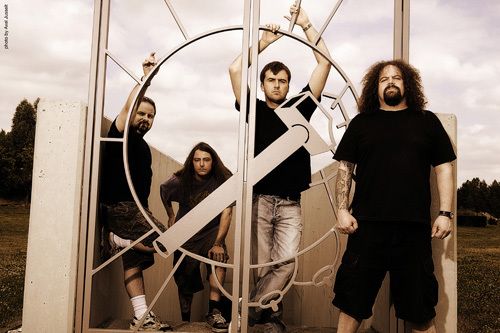 On first glimpse there isn’t anything remarkably special about Meriden, a small but pretty town lying some miles outside of Birmingham City centre between Solihull and Coventry. Apart from the fact the local church dedicated to St Lawrence was apparently founded by naked horse riding enthusiast Lady Godiva, it looks like many other picturesque settlements in rural Britain. Look at its position on a map of England however and something remarkable becomes clear: it is at the exact geographical centre of the country. That Meriden – situated in the middle of England and also representing much that middle England values – should spawn one of the most important bands in the history of extreme metal is ironic indeed. If one were to imagine the band that least represented middle England then perhaps Napalm Death would be the first choice.

The band formed around the core of Nic Bullen and Miles Ratledge in late 1981 while the pair were still at school (although neither would survive the band’s vicious revolving door for more than a few years). Like many young bands from the early 80s, they drew inspiration from the punk scene without buying into its formulaic rigidity. To be specific they were influenced by the anarchist collectivist punk that was the true distillation of the genre after the fashionistas had moved on to the emergent New Romantic and goth scenes. In an ultra-DIY, politically conscious way, bands such as Crass, Flux of Pink Indians and Discharge were of great importance to Napalm Death rather than such chart toppers as The Sex Pistols or The Clash. In fact it would be Crass Records that would be the first to release material by the fledgling group on one of their ‘Bullshit Detector’ compilations.

Napalm Death were not afraid to push at sonic boundaries, that they were seeking to find a new language to express their dissatisfaction with the world.

One of many early recruits was Justin Broadrick, who shared Bullen’s interest in power electronics, harsh industrial and post punk bands such as Killing Joke. Broadrick wouldn’t remain in the group long before leaving to carry on with his own power ambient project Final and to form Godflesh but his inclusion shows that right from the beginning Napalm Death were not afraid to push at sonic boundaries, that they were seeking to find a new language to express their dissatisfaction with the world. They intended to marry the crushing density of heavy metal to the harsh atonal noise of industrial with the speed and social awareness of second wave punk and the ‘shock of the new’ sound of thrash metal (by such early pioneers as Celtic Frost). And their message wasn’t a metaphor of any kind – they would express their disgust with the world clearly and this would be matched equally by a striking sense of revulsion in the very noise itself. The new sound would come to be known by its fans (who included a very supportive John Peel) as grindcore.

Ratledge was unhappy with all of this boundary pushing however and left, leaving the drum seat open to Mick Harris (who would go on to found Scorn). And with Bullen on bass and vocals and Broadrick on guitars they recorded a demo which would eventually surface as the first side of the epochal album ‘Scum’. This line up would be short lived and it would be Harris along with Shane Embury (the only early doors member still part of the group) on bass, Bill Steer from Scouse grindcore sorts Carcass on guitar and Lee Dorian (who would go on to find fame with Cathedral) on vocals who would finish the b-side of the album!

ND’s Guinness Book Of Record entry speaks volumes. They hold the record for shortest video and shortest song ever recorded for ‘You Suffer’ which clocks in at a whopping 1.3 seconds long.

After he appreciated the way the band put “hardcore and metal through an accelerator”, the album was released on Digby Pearson’s new extreme metal independent, Earache and for such a pulverisingly harsh record it caused people around the world to sit up and pay attention. Tracks such as ‘You Suffer (But Why?) were a blur of barely distinguishable drum beats, untrammelled guitar thunder and roaring vocals clocking in at under two seconds long. Experimental pioneers such as John Zorn declared the record free jazz and for the first time ever when parents complained to teens that what they were listening to was “just noise”, they were more or less right. Even detestable Radio 1 DJ Steve Wright would threaten members of his posse with playing Napalm Death if they displeased him. But to anyone with a pair of ears, this and the follow up album ‘From Enslavement To Obliteration’ could be taken as deadly serious, an observation that could not always be levelled at other grindcore bands such as Lawnmower Deth or Electro Hippies. This said, ND’s Guinness Book Of Record entry speaks volumes. They hold the record for shortest video and shortest song ever recorded for ‘You Suffer’ which clocks in at a whopping 1.3 seconds long.

But as fun as appearing on the seminal ‘Grindcrusher’ compilation was, Napalm Death (and friends Carcass) had more to offer so evolved their sound to incorporate elements of Death Metal. With a slower approach to the BPMs, for the first time people other than the aficionados of the extreme could tell what a progressive and gifted group Napalm Death had become and this was reflected by some level of success in America, especially as a touring band. By the 1990s the line up solidified around Embury, vocalist Mark Greenway, guitarists Jesse Pintado, formerly of Terrorizer and Mitch Harris and sticksman Danny Herrera. But even if the band was an entirely different to the founding incarnation, they proved themselves to be a rarity: a group that was bigger than any of the people involved. The interest in politics and extremity remained, so when they recorded a cover version of The Dead Kennedys’ ‘Nazi Punks Fuck Off’, the proceeds were donated to anti-fascist charities. This in turn caught the interest of Jello Biafra who sang on their 2005 album ‘The Code Is Red . . . Long Live The Code’. Naplam Death are not the last word in extreme music but the fact that such an excoriating band from the West Midlands are still known and appreciated by so many is a testament to their skill and importance indeed.