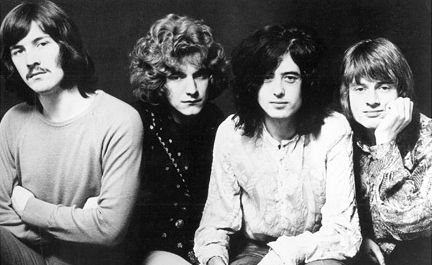 To many, they are quite simply the biggest and best hard rock band of all time (and this was certainly the case during the decade of debauchery they reigned over, the 1970s), combining bottle neck delta blues, English folk, heavy rock and occultism. They not only set new standards for what bands could achieve artistically and financially but they also completely rewrote the rule book on what rock stars could get away with and indeed what they should actually behave like. Few, if any, have managed to top Zeppelin however, and they represented a brief efflorescence during a short period when rock music seemed to become almost as important as life itself. The strangest thing about it all however, was that it nearly never happened.

…it was Jimmy Page who struggled on with the ailing band. He was left standing at a crossroads… He had the opportunity to limp on with the band, go back to being a session musician, abandon music for his other love, art or to try something completely different. And luckily for us the fourth path – the one he chose – was pointed directly at the heart of the Black Country

Some years earlier in 1968, the future of The Yardbirds looked decidedly shaky despite the fact the group had been home to three of the most talented British guitarists of the decade. But despite being more forward looking than either Jeff Beck or Eric Clapton, it was Jimmy Page who struggled on with the ailing band. He was left standing at a crossroads – not unlike his hero the bluesman Robert Johnson. He had the opportunity to limp on with the band, go back to being a session musician, abandon music for his other love, art or to try something completely different. And luckily for us the fourth path – the one he chose – was pointed directly at the heart of the Black Country.

Robert Plant was born in West Brom in 1948 but he moved into digs in Walsall when he was 20 turning his back on a career in accountancy determined to become a successful rock musician. After a stint in ‘almost-made-it’ Band Of Joy, he threw himself into the appallingly named (and not much better sounding) Hobbstweedle. This said Plant’s obvious fascination with fantasy literature and his distinctive operatic/bluesman wail made a deep impression on a lot of people. One of these was Peter Grant, who would go on to become perhaps the most famous rock manager of all time. His main job at the time was looking after the almost defunct Yardbirds and he sent a telegram to Plant asking if he would like to sing with the already famous Page. The affable and self-proclaimed “hippy from the Black Country” ripped the telegram up fearing a joke. Luckily for him (and for us) Grant dispatched another message which was taken more seriously. The second telegram is now framed and hanging on the wall of Robert Plant’s very, very big house.

Just as Page insisted on picking his mate, session bassist John Paul Jones over a more obvious choice, Plant saw to it that the Midlands musical mafia stuck together. He put forward his pal John ‘Bonzo’ Bonham as drummer because he’d played with him before and even slept on his couch when he couldn’t afford his rent. The sticksman was born in 1948 in Redditch, South of Birmingham and by the time he turned 20 he had already developed a rep as the heaviest drummer in the Midlands – if not the entire UK. He was already muscle bound as a teen due to his day job being a hod carrier on a building site and was barred from several venues in Brum for drowning out all other musicians.

They decided to call themselves Led Zeppelin on the advice of Keith Moon who joked they would go over “like a lead balloon” if people heard them. Right from the off, however, they were revolutionary, mixing the emergent heavy metal with blues and folk. America was the first country to accept them where their status as “the hammer of the gods” was rapidly cemented. It was here where they threw themselves into rock and roll excess with vigour and for Plant especially it represented vindication. He had dreamt of cities like San Francisco in 1967, the summer of love, while he was laying asphalt on West Bromwich High Street. But now they had made it.

He had dreamt of cities like San Francisco in 1967, the summer of love, while he was laying asphalt on West Bromwich High Street.

When ‘Led Zeppelin II’ toppled The Beatles’ ‘Abbey Road’ from the top spot of the UK album charts in December 1969, it felt far from a coincidence. Like the musical landscape had just shifted dramatically with the change of the decade. The Rolling Stones must have felt aggrieved but still licking their wounds after the murder of a fan at Altamont, they could do little to stop the baton being passed from one group straight to the other in front of them. Zep cemented this defeat with the release of ‘Led Zeppelin IV’, the fourth best selling album of all time, that contained the rock anthem of the 70s, ‘Stairway To Heaven’. It was this track with the supposed back masked dedication ‘Here’s to my sweet Satan’ that started the rumours that would dog the group for the rest of their career: namely that they had sold their souls to Lucifer in return for success. Rock’s more credulous conspiracy theorists would blame the ‘Zeppelin Curse’ for the untimely death of Bonham and the death of Plant’s son Karac amongst other things.

They may have reached their financial peak with ‘IV’ but their creative peak was yet to come. After the slightly stilted ‘Houses Of The Holy’, they finally silenced even the most rabid of critics with ‘Physical Graffiti’. Everything about this double album screamed epic, from the die-cut sleeve art, to the sweeping Indian string arrangements of ‘Kashmir’, to the sweeping vista of musical styles. Unfortunately there was only one direction to go it after such a career defining statement, and that was down.

After disappointing albums (‘Presence’, ‘In Through The Out Door’) the band were derailed terminally by the death of Bonham. In 1980, after a drinking session that saw him down over 40 vodkas, Bonham passed after inhaling his own vomit. He was only 32 and the band ended the decade in a sad mirror image of the glorious way they had started it. This said, Zeppelin, for all their faults and tragedy, had dragged the blues kicking and screaming into the electric age and changed everything. If Black Sabbath acted as the conduit to turn the blues into metal then Led Zep acted in the same way for hard rock. From AC/DC to Prince to White Stripes their influence is both undeniable and unavoidable.

It would be the best part of three decades before they played under their name again (with Bonzo’s son Jason taking his place on the drum stool) at the O2 Dome. The show (a benefit for Ahmet Ertegun, the founder of Atlantic Records who originally signed them) was the most oversubscribed ever, proving that despite the years, their star hasn’t waned – if anything, they’re more popular than ever.