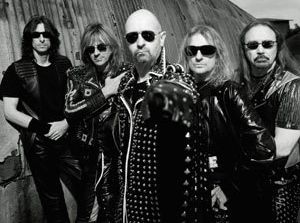 If one band more than any other is comparable to the fictional yet gloriously archetypal heavy metal band (by which all other heavy metal bands must be judged by) Spinal Tap, then it is the boys from the Black Country, Judas Priest. The monstrous egos, the untrammelled rock and roll excess, the terrifying fashion statements and the way with a saucy innuendo were all in place and that’s before we get onto all those ex-drummers. But if the Priest occupy a very vivid and slightly daft place in the perception of lay people all over the world, their legions of fans knew that their legacy ran to them being true musical innovators, bridging the gap between the heavy metal mark I of Black Sabbath and the myriad genres of the 80s and beyond. They basically laid the bedrock for thrash, death, black and other forms of metal madness that would save it from being just another offshoot of rock and help it become the most dominant musical genre of the last two decades. There was also a dark side to JP that was never very far away; and whether they liked it or not, they were – and still are – dogged by controversy which was a million miles away from the throwaway daftness of their involvement with Hear n’Aid or the video to ‘Breaking The Law’.

They basically laid the bedrock for thrash, death, black and other forms of metal madness that would save it from being just another offshoot of rock and help it become the most dominant musical genre of the last two decades.

The Priest share a similar history to that of Black Sabbath, with the core coming together in the late 60s to record a heavy electrified version of progressive blues rock. But while the Sabs were from Aston in Birmingham, the Priest hailed from the Black Country. Their most enduring frontman Rob Halford grew up in the gritty working class confines of Walsall, whereas guitarist KK Downing and drummer Ian Hill were from West Brom, with the other mainstay of the group, guitarist Glenn Tipton coming from Blackheath.

They hardly sprang out of the traps, initially fronted by the well meaning but uninspired Al Atkins and within months they had lost their original drummer (this was no Tap-esque caper though – he committed suicide on their first ever tour bus). Around this formative period they chose their name from the most unlikely of sources. The band were all fans of a “nice Bob Dylan tune” called ‘The Ballad Of Frankie Lee and Judas Priest’. Who would have predicted that the king of the 60s folkies would be the inspiration for the classic heavy metal band of the late 70s and early 80s?

After about four years of touring the toilet circuit supporting other bands they’d signed a deal with Tony Iommi’s management company but little else so Atkins left to spend more time with his young family. Close to splitting the group managed to attract the attentions of a cherubic young Halford by revealing they had secured a support slot with Budgie! But perhaps the most significant decision in their development was to add an extra lead guitar in the form of Glenn Tipton to that of KK Downing. Their first album ‘Rocka Rolla’ hardly set the world on fire but they had already worked too hard to give up so easily.

It wouldn’t be until 1976 that they released an album (‘Sad Wings Of Destiny’) that they – and the public – respected. Recorded at the legendary Rockfield studios in Wales that had seen the genesis of classic records by Queen and Led Zeppelin, they had finally discovered a sound that was unique to them. It was ironic that after seven years of struggle, standing on the verge of success, that something happened that by rights should have ended their career there and then: The Sex Pistols released ‘Anarchy In The UK’. But if punk was responsible for clearing some of the classic rock deadwood out of the way it was only one aspect of a musical renaissance that was sweeping the globe. The energy that was fuelling punk was also fuelling the birth of disco, hip hop, indie, and most importantly to us, the New Wave Of British Heavy Metal. Judas Priest weren’t destroyed by this stiff broom; they were made by it and they, like Iron Maiden and Motorhead, borrowed some of punk’s showmanship, nihilism and anger.

But all of this success had been so long in coming (imagine a band being allowed a decade to grow and develop their sound now!) that they never really lost touch with their roots in the West Midlands.

The ‘Sin After Sin’ album not only marked the start of the group’s imperial period but it marked the point where they became a truly visionary band laying down the foundations for bands that would follow – from Iron Maiden to Slayer via Venom. And if critically they had arrived, they did so commercially as well with the follow up ‘Stained Class’, when they first made their presence felt across the pond. But all of this success had been so long in coming (imagine a band being allowed a decade to grow and develop their sound now!) that they never really lost touch with their roots in the West Midlands. They never ditched their accents for preposterous trans Atlantic drawls – the trials and tribulations of their own culture were too strongly engrained for anything like that.

It was around this point that Judas Priest contributed something to metal as a genre that was of insurmountable importance but is very rarely discussed: they cemented the dress code. Out went all of the uncomfortable throwbacks to the 60s, the loon pants, the paisley shirts, the velvet jackets, in came tight denim, patches, leather, studs and biker boots, while everyone else was cutting their hair short in the late 70s, they opted to keep theirs long. The heavy metal anti-uniform uniform was born and you only have to look at bands such as Trivium and Dragonforce today to see that this is still the common currency.

For evidence of how much they owe to the culture that gave birth to them, you only have to look at what many consider to be their best album ‘British Steel’ (the name itself is a nod to the heavy industry of the West Midlands). Songs about tearaway childhoods such as ‘Breaking The Law’ were triumphant rather than defeatist and they used lots of innovative sonic effects to produce a ‘factory’ like sound. As Glenn Tipton later confirmed: “A lot of character in Judas Priest stems from . . . the upbringing in the Midlands.”

It is true that they have weathered some particularly harsh storms but they are now back together with the classic line-up still raging hell bent for leather.