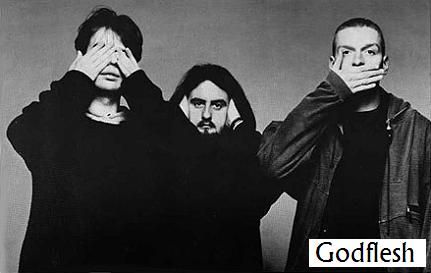 If the UK’s music scene was in any way a meritocracy then Justin Broadrick would need no introduction to the CD buying and downloading masses. As it is, he is a marginalized figure despite being arguably the most important player in UK extreme music of the last 25 years. Perhaps this relative obscurity is something to do with the sheer otherworldliness of his oeuvre. From the power ambient collage of Final that he started making when just 13 years old to genre kick-starting work he did on Napalm Death’s ‘Scum’, the original grindcore album, to the blissed out shoegaze drone of his current incarnation Jesu, everything he has done has been extreme; none of it has been pedestrian. But out of the numerous bands he has formed, none was as punishing, influential and as bleak as Godflesh.

After leaving Napalm Death because of the creative restrictiveness of grindcore, Broadrick was determined to explore much slower BPMs. The group was initially a duo comprised of Broadrick on vocals, guitar and programming and Ben (GC ‘Benny’) Green on bass. In 1988 they envisaged combining the relentless grind of Swans, the harsh industrial attack of Throbbing Gristle and the atonal guitar noise of PiL’s ‘Metal Box’. The result was a self-titled mini album that immediately created waves in the UK and earned them a tour support slot with Napalm Death in America. The apocalyptic noise suited the name – an ironic reference to Catholic communion which just happened to be the ancient Aztec name for magic mushrooms – down to the ground. But it was to be their full-length debut on Earache, ‘Streetcleaner’ released in 1990 that would really mark them out as something special. A psychedelic and disturbing combination of heavy metal, post punk and industrial, it literally seethed with a balefulness and paranoia that was reflected by the cover art of the silhouettes of crucifixions seen against a burning lava flow, suggesting a world going to hell. The image was taken from Ken Russell’s bombastic but impressive film ‘Altered States’ that was watched by the front man and his friends when they were high on LSD. Perhaps the biggest signifier of their nihilistic intent is the barely audible sample of Mark David Chapman describing how he murdered John Lennon during the album’s title track.

The album was set down in just two sessions. One was recorded in Birmingham and the second was arranged in Nottingham by Earache boss, Digby Pearson. They were joined on second guitar by Broadrick’s friend Paul Neville, who was enlisted to make the sound even more impenetrable. The influence that Birmingham has had on Broadrick and on the sound of Godflesh cannot be underestimated. There is an obvious tangential connection between the industrial steel mills of city and the ‘metallic’ music of bands such as Black Sabbath. But with Godflesh, their antipathy towards their hometown and sonic and lyrical bile are a direct product of the experience of growing up in the giant city – like a dark inversion of Wordsworth’s relationship with the Lake District.

From his birth in 1969 Broadrick spent his formative years in a hippy commune in the suburbs of Birmingham. However far from being an idyllic childhood, he had a father who was a heroin addict and, according to alt. rock legend at least, may have tried to murder his wife and child with overdoses and it was perhaps unsurprising that Broadrick himself has been smoking pot pretty much since he was in double figures. On the positive side however, he has admitted that he was exposed to a very diverse range of musical influences such as hearing Lou Reed’s Metal Machine Music, Can and Throbbing Gristle. All of this, framed by a city hit hard by unemployment and urban decay, led to levels of musical and lyrical nihilism that had never been seen before.

This said, America paid attention almost right from the start. It was almost unbelievable how the metal community Stateside fully grasped what the band were trying to achieve while simultaneously working out exactly how they could reshape the Godflesh blueprint to appeal to a much wider audience. Coming from the electronic industrial side of things Nine Inch Nails and Ministry both crossed over to massive success after being influenced by bands such as Godflesh and the Swiss sampler innovators, The Young Gods. Their influence would also be felt on mainstream metal as well with no less an authority than Metallica’s Kirk Hammet declaring them the “heaviest band on the planet”. But perhaps their biggest legacy was in Korn and the birth of nu metal.

Amongst the artists sampled by him for use on Godflesh tracks include Eric B and Rakim’s ‘Let The Rhythm Hit ‘Em’, Gang Starr’s ‘Speak Yo Clout’ as well as the underground acid house anthem ‘Humanoid’ by Stakker

Broadrick, an extremely open minded individual working in a field that usually requires/inspires intense tunnel vision, was no stranger to hip hop. Amongst the artists sampled by him for use on Godflesh tracks include Eric B and Rakim’s ‘Let The Rhythm Hit ‘Em’, Gang Starr’s ‘Speak Yo Clout’ as well as the underground acid house anthem ‘Humanoid’ by Stakker. This undeniable dance influence and their habit of remixing many of their tracks (such as the awesome ‘Slavestate’ remix EP) was watched with interest by a young band called Korn who again, were indebted to his combination of industrial strength dance, bleak lyricism and anvil heavy metal.

The intensity of the music was matched by the intensity of the people involved and perhaps unsurprisingly Godflesh had something of a revolving door recruitment process. Most famously Robert Hampson the frontman of krautrock inspired drone rockers Loop joined for just a few months before quitting. By the time of ‘Songs Of Love And Hate’ (an unlikely homage to Leonard Cohen) they were after a more organic, metal sound and drafted in drummer Brian Mantia, however he eventually made way for long time Broadrick collaborator and Prong sticksman Ted Parsons. When eventually CG decided he couldn’t face touring any more he quit and even though they drafted in the late Paul Raven from Killing Joke as a replacement and they had a full American tour planned, Broadrick had a nervous breakdown and disbanded the group. Despite influencing an entire generation of fans of extreme music and heavy metal, Godflesh were never popular during their existence and barely made anyone involved any money. In fact, the cancelled tour left Broadrick massively in debt.

Right to the end the shadow of Birmingham both positive and negative hangs over the history of Godflesh. And it certainly doesn’t seem like a coincidence that now that this elder statesman of avant metal lives near Abergele in North Wales his output as Jesu is a lot, lot more chilled out.