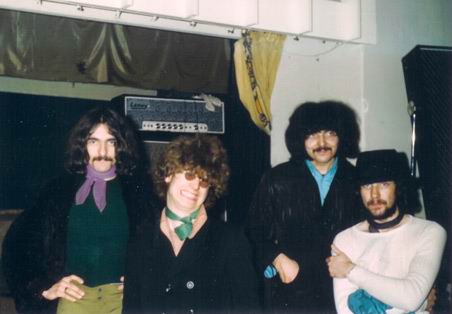 The late, great Dimebag Darrell, former guitarist with Pantera once told this correspondent: “Sometimes you just think ‘What’s the point? All the great riffs were written before I even went to school – and they were written by one group, Black Sabbath.” It is probable that just as no other band ever has or ever will be associated with Birmingham more than Black Sabbath, like wise no one else will come to embody heavy metal more. Much has been made of the connection between the Satanic mills, the car works, the sheet metal plants and the heavy industry of the midlands and the fact this is the spiritual home of hard rock and heavy metal. But if the UK’s second city was the industrial pulse of the country in the 60s and 70s, then Aston in turn was the steel grey heart of Birmingham. A suburb that hadn’t been rebuilt properly from World War II bombing before the tower blocks and the factories sprung up, it was perhaps fitting that all of the band were born there at the tail end of the ‘40s.

he earned himself a period of relaxation at Her Majesty’s Pleasure where he had time to rethink his game plan and give himself distinctive ‘OZZY’ knuckle tattoos and smiling faces on his knees in order to cheer himself up.

If you want to get an insight into the mindset of John ‘Ozzy’ Osbourne, you only need to look at his first three jobs after leaving school. The first was in the noisy car plant where his mother worked; then he started working in a slaughterhouse where he would despatch up to 250 animals a day; and then he graduated to burglary. Luckily he was terrible at all of these and in the case of his last job, he earned himself a period of relaxation at Her Majesty’s Pleasure where he had time to rethink his game plan and give himself distinctive ‘OZZY’ knuckle tattoos and smiling faces on his knees in order to cheer himself up.

Soon to be bassist Terrence ‘Geezer’ Butler had a particular gift for figures (something that would help the band in later years) and worked as a clerk in a factory. Tony Iommi worked in a sheet metal plant where he lost the tips of two fingers in an accident. Again, this tells you much of what you need to know about the would-be guitarist. Instead of giving up, he fashioned two finger tips out of melted down Fairy Liquid bottles and sought inspiration from another tri-fingered guitar virtuoso: Django Reinhardt. Bill Ward was a coal delivery man, perhaps explaining the awesome muscular power he had at his disposal to blast out those beats.

Tony, Bill and Geezer had played together in many different bands until one day they saw a fateful ad in a music shop window reading ‘Ozzy Zig needs a gig. Own PA system.’ It’s safe to say that the latter sentence was more important than the former. After a few more changes to their moniker ( and a brief stint in Jethro Tull for Iommi) Black Sabbath were born at the tail end of the 60s, named after a suitably ominous Boris Karloff movie. Just as the hippy dream was wounded fatally along with Meredith Hunter while the Rolling Stones played at the Altamont Racetrack in December 1969, the new, darker spirit of the 70s was being recorded in the form of Black Sabbath’s self-titled debut on the other side of the world in Birmingham.

…they managed to do what so few bands have ever done: they achieved a clean break with the past, kick-starting a massive leap forward in rock music.

One of the many characteristics that helped to define them as something entirely new and not just another blues rock band was the sheer visceral volume that they played at which was born out of nothing other than sheer aggression and angst. In many respects they were not only the first metal band but the first UK punk band as well. Their debut, appropriately enough was released on Friday 13th, February 1970 with the stated aim of “out-heavying” Led Zeppelin. Not only did they achieve this but they managed to do what so few bands have ever done: they achieved a clean break with the past, kick-starting a massive leap forward in rock music. The tolling bell, the driving rain, the sludgy overdriven bass lines melting into fuzzed out guitar work, the riffs based not on the traditional blues scale but on the eerie sounding tri-chord music that was much more associated with horror movies and funeral dirges than rock. This was heavy metal. This was doom.

At first no one took any notice. They were hated by the press and public alike. In fact only a tiny band of beer and pot crazed youngsters in the UK kept the band afloat but their second album was about to change everything. By all accounts the first ever bona-fide metal anthem ‘Paranoid’ was knocked off in a couple of hours as an afterthought to plug a gap on the album but would go on to be the band’s first number one single. The band, uncomfortable with the amount of attention that was focused on their interest with the occult, ditched the Satanism and this time concentrated on the more gritty subjects of warfare, drugs and depression. The resulting album, which also contained the classics ‘The Wizard’, ‘Iron Man’ and ‘War Pigs’ launched them straight into competition with Deep Purple and put them within punching range of their friends, Led Zeppelin.

The coming years would be seen by many as Sabbath’s golden age and they certainly hit their stride in both commercial and critical terms. (Advance orders of third album ‘Masters Of Reality’ earned it gold status before its release, though, in typical Sabbath style, the band were only presented with platinum discs in 1986. The delay was because of their ‘unorthodox’ business methods.) The band hit, what many see as their creative peak on ‘Volume 4’ which contained such gems as ‘Supernaut’. The band rumbled on garnering fans and plaudits wherever they went until Iommi’s desire to take the band in more a more progressive direction and Ozzy’s wish to stick exactly to the formula led the latter to split away to forge a successful solo career. The band by and large became a focus for Iommi’s guitar skills and took on numerous other members, the most notable of whom was the singer Ronnie James Dio, formerly of Rainbow. Nothing could keep the originators apart forever though and after reforming for live shows in 1999, Black Sabbath have returned (when it suits them naturally) periodically to reclaim their crown as the godfathers of metal.