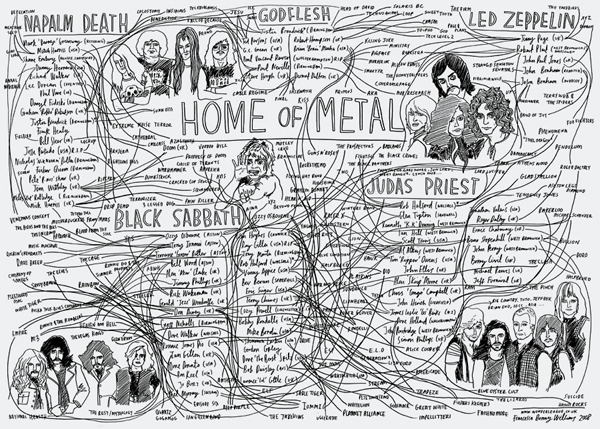 
Home of Metal aims to celebrate the bands that helped put Birmingham & the Black Country on the musical map, but also had the imagination and talent to create new genres and movements, all in their own individual ways. From Black Sabbath, unquestionably the founding fathers of Heavy Metal who introduced a sense of darkness, the supernatural, and huge, heavy riffs to an era still celebrating peace, love and flower power.

Led Zeppelin , arguably one of the worlds biggest ever bands, who were one of the first to dirty up RnB and recreate it as Hard Rock. Judas Priest , defenders of the faith whose twin guitar attack paved the way for multitudes of melodic metal acts in their wake. The 80s and 90s are also represented by Napalm Death , whose first two albums introduced grindcore to an unsuspecting world, and finally Godflesh , whose brooding, desolate soundscapes pioneered industrial metal.

Apart from their postal codes and accents, all of these bands share a common trait in that they all were unwilling to conform to the established rules and guidelines of their respective musical scenes, and instead, embraced originality and all brought something staggeringly new to their respective musical scenes, and for the most part, established new genres, sub-cultures and continue to inspire to this day.