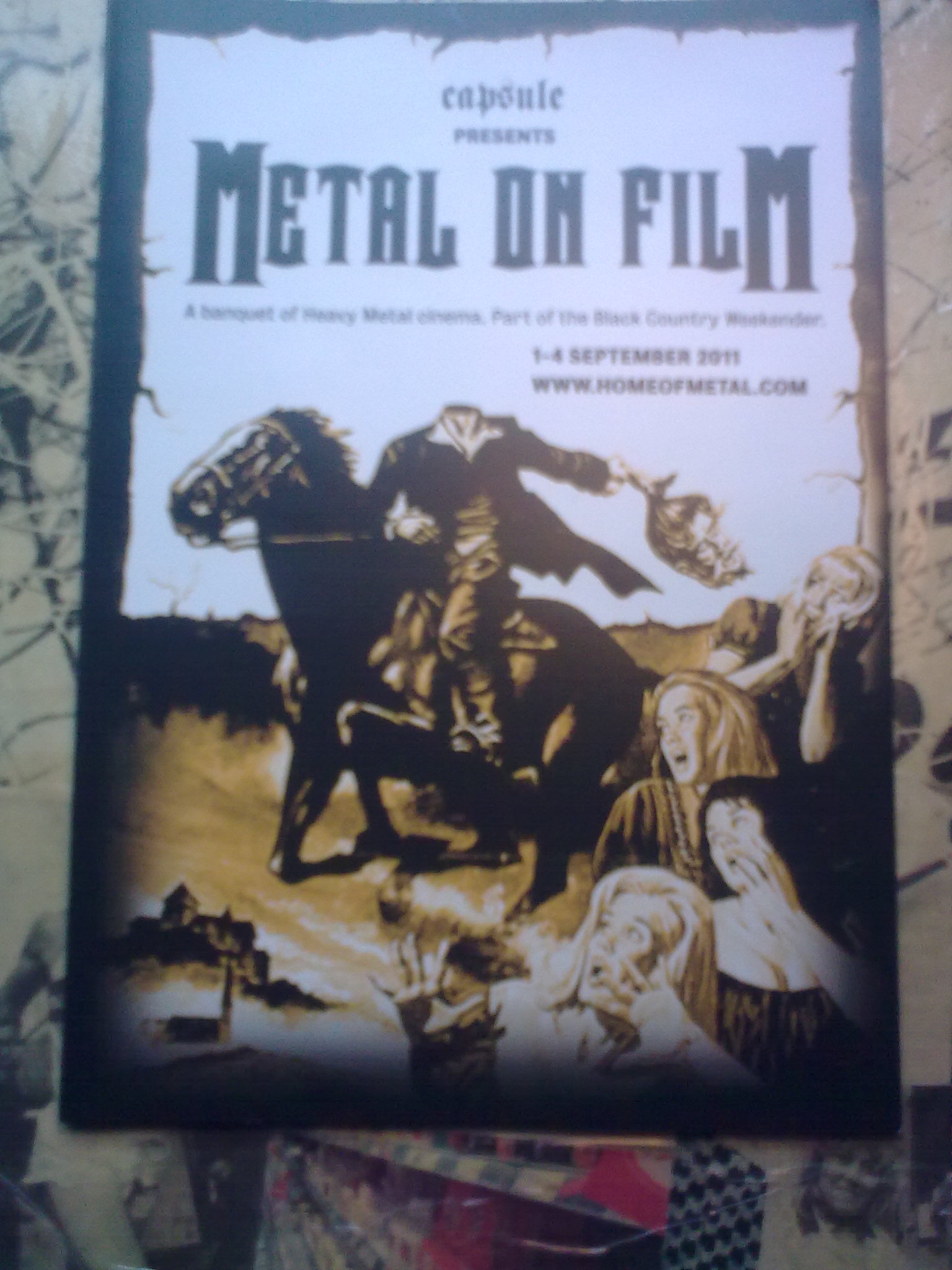 I was asked to introduce it and have reproduced my 5 minute talk here.

NOW THAT’S! what I call a horror film

Welcome to the Home of Metal screening of the film Black Sabbath. I’m going to try and introduce the film by telling you some stuff that you won’t find on the WikiPedia entries for the film or the band – you might find some of this on the Home of Metal website though as this all comes from the original research that I did during the Home of Metal project.

There are several accounts pointing towards Geezer Butler as the member of the band who suggested this name and several people, including me, have tried to speculate as to the location of the cinema at which he would have seen the film poster for the film we are about to see. The thing is, in mid 1960s Birmingham, when this film was released there were LOTS of cinemas all over the city. Within walking distance of Geezer Butler’s home on Victoria Road Aston I can name three cinema’s which were no more than about 100/200 meters away from each other. There are several instances of members of the band talking about seeing the film poster at a cinema “across the road from where they used to rehearse” – but that’s no help to us really as I know of a least four places where they used to rehearse and its likely that there was a cinema (or two) within sight of all those places.

To further illustrate that – I work in a building that is eight stories tall, which conveniently for this narrative is built on the site of Birchfield Road Secondary Modern where Ozzy and Tony attended school. If I go up to the top floor I can look in any direction and identify the locations of numerous cinemas that operated in the last century. Today I can look in the direction of only one cinema – part of a leisure complex – ok, it has half a dozen screens but its kind of isolated from the community – its not part of the fabric of life, school boys do not pass it every morning. You have to make an effort to get to it. How many of you can walk to a cinema from your home, or how many of you walked past 3 cinemas on your way to school? In 1964 people went to the cinema every week regardless of what was on. Cinema was a big part of everyone’s entertainment culture, along side drink it was easily accessible – going to the cinema didn’t involve the hire purchase agreement or several months wages that buying a television necessitated. So, its probably more accurate for us to say that members of the band saw the poster for this film all over the place from 1963 onwards.

Even though cinemas are not part of the local community in the way that I described in the last century the influence of film on the world of music remains strong. Thanks to video young musicians can now soak up the whole of cinema history during their slacker/arts schools apprenticeships and thus have a wealth of cinematic references to draw on when they sit down with a list of names to fight it out over the chosen words that will capture potential listeners and immediately orientate them to the kind of music they might expect to hear from a band.

Black Sabbath cannot have been the first band to take inspiration for a name from a film and they certainly weren’t the last – it’s a proud tradition followed by My Bloody Valentine and Mudhoney to name two of my favorites. I had a quick think about other Birmingham bands who have taken celluloid inspiration when identifying themselves to the wider world and it wasn’t difficult to come up with a list – so here goes with a list of the Good The Bad and The Ugly of Birmingham bands who have names associated with film – in no particular order:

Fine Young Cannibals shortened the title of a film for their name, Duran Duran are named after a character in a film, Korova Milk Bar take their name from a place depicted in a film and the fictional Triangle of Joel Lane’s novel were named after a cinema – an art house cinema, but as Marty Deburgy says in the intro to Spinal Tap about The Electric Banana, the club in Greenwich Village where he was first knocked out by Spinal Tap’s timing – don’t look for it, its not their anymore.

I’m sure that list could expand greatly but you get the point. And the only other Birmingham band since Black Sabbath worth bothering with for my money are Einstellung, and they take their name from a process associated with film making.

Onto tonight’s film itself. That is a little bit difficult for me to talk about, as I have never actually seen it. But I did have a very interesting conversation about the psychology of horror films with the curator of a new exhibition about horror films at a popular culture museum. He was telling me about how horror films WORK on a very human level by pressing psychological buttons.

So with that in mind I wanted to link this back to the subjects covered by the Home of Metal project and remind you that we are not solely focusing on Black Sabbath. The political climate in which Napalm Death emerged in the mid 1980’s is a strong message of our exhibitions and that put me in mind of my favourite horror film, which I have seen, many times. I’m not sure if many other people consider it a horror film but in the mid 1984 a graphic depiction of the impact of nuclear war certainly worked on a psychological level and pressed a lot of buttons for me as a 12 year old. The title of Napalm’s second album ‘From Enslavement to Obliteration’ speaks to me of the film Threads. I don’t directly know of any Napalm lyrics which turn their attention to the population exploited by the system and then being wiped out – subject to the whims of generals in their masses, treating them just like pawns in chess and starting wars for oil or fun, but I’ll bet they wouldn’t be too hard to find.

Threads focuses on Sheffield before and after an exchange of mega tonnes and in particular Ruth, a young lass who we follow as she sees her fiancées family die, leaves her own family to perish and later gives birth in a post apocalyptic world. She dies before her daughter; who, aged about 12 or 13 conceives and gives birth herself. Now That’s what I call a horror film. The derogation of language in a world that rapidly reaches a sub-medieval level is one of the things that really gets under my skin about the film, it seems frighteningly possible – I have a feeling that it will seem a lot more plausible than some of the imagery that I am about to see in this film. You could say that in Threads the BEAST, in the form of the post apocalyptic generation, isn’t revealed until the closing frames.

But I’m sure I’ll enjoy Black Sabbath the film – it will entertain rather than leave us staring into space shitting ourselves at the fragility of society.

I hope I have told you something that you couldn’t find on Wikipedia, and if you have not seen THREADS – it’s on You Tube. Though I hope that it might find a suitable place on a 7inch cinema programme before too long so we can ‘enjoy it’ on the big screen.