The Grindcore scene developed from the floor of The Mermaid pub, spread across the country, and then the world. Napalm Death suffered numerous line up changes but the Grindcrusher tour sealed their reputation as one of the most extreme bands around, along with other British Grindcore acts Bolt Thrower and Carcass.

Grindcore and the bands that developed the sound are now established features of Heavy Metal. In 2011, Napalm Death celebrate their 30th anniversary. 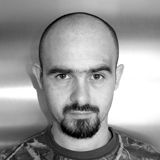