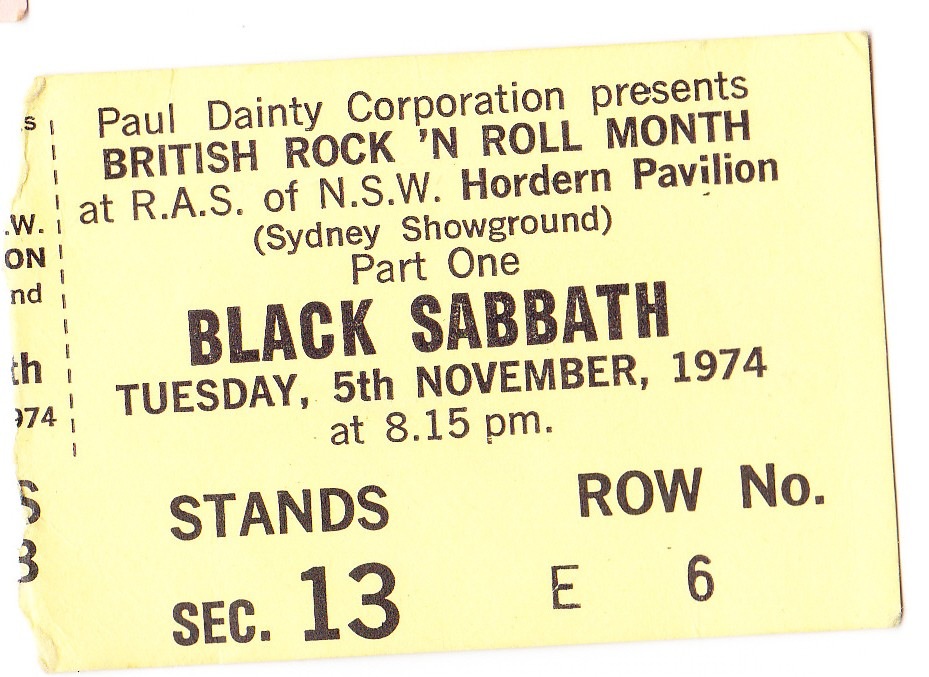 Unknown Sydney band AC/DC was support that night! They kicked serious butt! The sight of Angus Young in a school uniform complete with cap and backpack was most refreshing in an era where Disco music was all the craze. It was also one of Bon Scott’s earliest appearances after replacing Dave Evans as front man. The set ended with the most spectacular Angus Young solo ‘360 spin’ on the deck, without missing a note! Fuck me it was awesome!!!!!

Then, it was Black Sabbath’s turn to blow our minds! With infinitely more Marshall speaker boxes set up by roadies during the interval and the band fashionably late (as was the practise in those days) the entire full house was brimming with excitement… Kill the recorded music (usually Allman Brothers’ Band – Jessica) lights out, silence and finally its THE BAND, man! An explosion of sound, hitting you like a baseball bat to the ears!! Tomorrow’s Dream was the opening track, it sounded just like the record! What a production, especially that crystal clear, perfectly pitched, unique Ozzy Osbourne vocal! His ‘attitude’ & energy on stage was a major highlight of the gig.

Tony Iommi, wearing his signature ‘cross on a chain’ looked great, he was ‘in the zone’ but there was something oddly unique about his guitar playing style? I couldn’t work it out? I learnt later Tony lost the tops of his middle & ring fingers in a work accident and was forced revise his method of playing. What a genius! Hats off, respect to you Tony!

Geeza Butler, sporting the longest hair in the band was going off!! As a young 15-year-old, I had never seen a bass player perform live without a plectrum! Geeza tickled those strings with incredible fervour and precision! And of course, Bill Ward on drums. A powerful wrist drummer who was all ‘action & arms’! He performed a 5 minute (approx) drum solo that was the benchmark for all ‘stickmen’ to aspire to!

What a night, the crowd departed the arena soaking in sweat courtesy of one of the best hard rockin’ performances ever witnessed in this beautiful big land known as AUSTRALIA!

Priest and NWOBHM Battle Jacket
I have geezer strings from the feb 2nd show,letter of authenticity,and set list of songs played on those strings,in autographed string box,with date ,also have my name in Bill’s book of poetry 4 of 200, signed # i also have and a lot of bills bill’s artwork he thanked me in the first,200 edition ,Edward j. Bransky jr thank you page i am comeing to exibition, would like to know if you would like to display