As our team are working from home, merch will be posted less frequently. Please allow up to 7 days for UK orders to arrive and up to 3 weeks for international orders. Thank you for your patience.
Order:
Random Random Uploaded Item date Votes
Filter: Judas Priest | Posters | 1990s
Bands Years Categories
Close
1992 302
votes 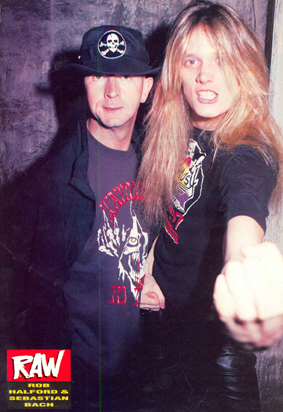 1992 RAW magazine poster featuring Rob Halford and Sebastian Bach (then of Skid Row). This photo was taken around the time that Rob guested live on stage in Phoenix with Skid Row when they covered the Judas Priest classic 'Delivering The Goods'. The track was recorded and released on the Skid Row single 'Youth Gone Wild/Delivering The Goods', and features on the album 'B-Sides Themselves'. Even though it is a great cover version, it's worth listening to just for Sebastian Bachs introduction of Rob Halford to the stage!