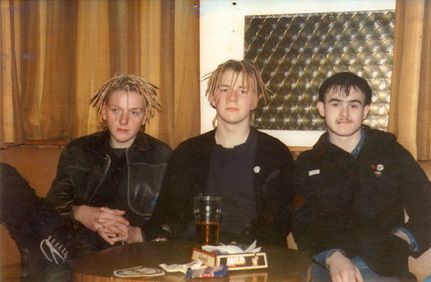 On hearing about the upcoming closure of one of Birmingham’s longstanding live rock and metal venues, ‘The Flapper’ in the City Centre, it got me thinking about the volume of excellent spaces the city has offered for both bands and audiences over the years. If there’s one thing I’ve noticed about Birmingham, my home for 48 years, it’s the resilient nature of the cities underground music scenes, and whenever somewhere seems to inevitably close, amidst the lamenting cries there is always a feeling of positivity that another will spring up. In that sense, the sheer size of the city and its industrial heritage often prove to be a bonus for gig goers, allowing promoters to cultivate entire scenes around certain pubs, clubs, warehouse spaces and areas within the city.

As a youth, keen to be part of the punk, metal and rock subcultures I would travel from my parents house in Aldridge, often by bus, into the city centre and sometimes beyond, to be part of the emerging scenes and eventually to promote my own bands and music.

Below are 5 of my favourite punk, rock, metal and alternative venues from the 80’s and early 90’s

The Mermaid Pub – Stratford Road, Sparkhill
The Mermaid, a fairly large but grotty pub in the middle of Sparkhill was my first real connection with the multi faceted nature of the Birmingham underground scene. Run by local promoter Daz Russell (who now runs Rebellion punk festival), it was often host to a heady mixture of punk, rock, metal, psychobilly, hardcore, psychedelic and noise artists. Daz had an eclectic music taste so you could go and see a punk crust ‘all dayer’ with Deviated Instinct, Extreme Noise Terror, & Amebix one week, then someone like Cardiacs, Head Of David, The Meteors or Swans the next. The Mermaid was a reflection of the diversity of music at the time, but also served as a reliable ‘Midlands hub’ for bands from all over the country to meet up, play and create their own DIY subculture. This gave rise to the John Peel endorsed ‘Britcore’ scene and bands like Napalm Death, my own band Doom, Bolthrower, Intense Degree, Carcass, Doctor & The Crippens etc etc who all received support from the legendary DJ and his Radio 1 show. Unfortunately the Mermaid was forced to close in the late 80’s due to many factors. It now stands as a restaurant, but its legacy lives on as one of the most important venues during the infamous mid 80’s ‘crossover’ period, where punk fused with metal.

The Barrel Organ – Digbeth High St, Birmingham
The Barrel Organ has been a staple of the city centre for decades. Essentially a large Irish pub in the centre of Birmingham, it has always served as a place for alternative people, bands, gigs and club nights. It would be home to all sorts of diverse subcultures, from glam rockers, to goths or indie types, but also punks and metal heads. During the 80’s and 90’s you could see all manner of bands at the Barrel, from death metal to Industrial to pop. It also played host to many emerging bands such as Manic Street Preachers and even U2. After changing its name to the Dubliner, it was resurrected as rock venue Subside and still serves as an important Midlands rock venue in the heart of the city.

The Coach & Horses – Balsall Heath
During the late 80’s & early 90’s, punk, rock, metal & experimental music was also colliding with emerging dance and rave cultures  and both Moseley and Balsall Heath seemed to be places where alternative folk, DJs and musicians would congregate. Moseley had its pubs and bars and a venue in the Jug Of Ale, but it was the Coach and Horses, another fairly grotty pub in Balsall Heath that played host to many underground bands at this time. Essentially one small room, the Coach & Horses was a place where you could book a gig last minute, drag a few amps into a space and get something together easily. It also allowed bands and DJs to work together making events more eclectic and interesting. You could have punk bands mixing with hip hop DJs or Temple Ov Psychic Youth mixing with Doom metal or grindcore.  Although its time as a venue was fairly short lived, it served as an important conduit for the changing scene and the diversity of music and arts in the area

Edwards No8 – Lower Severn St, Birmingham, City Centre
Originally opened in 1979, Edwards No 8 was probably the most well known and successful rock club and venue in the Birmingham area for underground and emerging rock bands. Whilst the Odeon and Hummingbird played host to bigger concerts such as Metallica and Ramones, it was Edwards that managed to bring some of the new fresher acts into a sweaty intimate setting. Over the years Edwards No 8 put on bands such as Nirvana, Rage Against The Machine, White Zombie, Pearl Jam, Smashing Pumpkins as well as Napalm Death, Carcass, Entombed, Melvins and many more. Unfortunately, at 1am, November 12th 2006, 500 hundred people were evacuated from a club night when a fire in the toilet broke out and Edwards No 8 was no more. It now operates as Eddies rock club at the Tunnel Club in Livery St.

Goldwyn’s / The Foundry, Suffolk Place, City Centre
In the early 90’s, after the fire at Edwards No 8, the Eddie Fewtrell owned Goldwyn’s (situated behind Edwards club) changed its name to The Foundry and began hosting the same sort of gigs that worked for the alternative Edwards crowd. Mixing punk, metal, doom, hardcore and emerging Nu Metal bands, the venue would host bands such as Misfits, Nine Inch Nails, Rancid, Cro Mags as well as providing spaces for local Birmingham bands such as Mistress and Harpies. After a successful few years as a venue, The Foundry, along with Mr Bill’s Bier Kellar were turned into office space and another fantastic venue was gone.