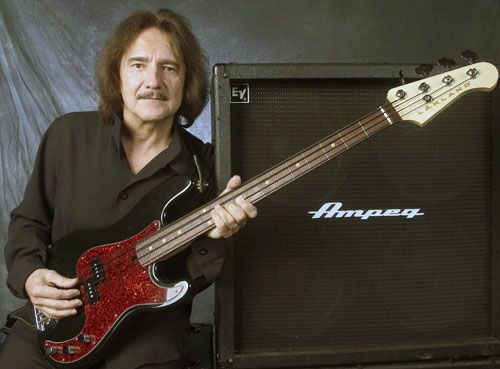 As Geezer is an avid Villa supporter this will be extra special for him. Geezer, whose full name is Michael Joseph Butler, will receive his star during the half-time of the Aston Villa VS Burton FC match, hosted by Carl Chinn.

Geezer was born in Aston, Birmingham on 17th July 1949. He received his nickname at a very young age, as he used to call ‘everybody at school’ Geezer. He was inspired by John Lennon to play rhythm guitar, before he co-founded Black Sabbath, whilst he was part of Rare Breed, a band he formed with Ozzy Osbourne.

Black Sabbath was co-founded with Tony Iommi, Ozzy Osbourne and Bill Ward, but before the name ‘Black Sabbath’ was settled upon, the band was called ‘Polka Tulk’ and ‘Earth.’ The band are credited with establishing the ‘heavy metal’ sound.

Geezer is recognised as being one of the most influential bassists in heavy metal. He used an unconventional method developing his bass playing such as using the ‘wah-wah pedal’ and introducing ‘down-tuning.’ Former Metallica bassist, Jason Newsted, has famously called Geezer the ‘Godfather and pioneer’ of the bass guitar.

Many of you will remember Home Of Metal’s coverage when Tony Iommi received a star on Birmingham’s Walk of Fame on Sunday 23rd November 2008, hosted by Kerrang! Radio DJ & long time Home Of Metal supporter, Johnny Doom. Also in attendance that night were Geezer Butler, the late Ronnie James Dio and a large turnout of local fans who braved the cold and rain to see the legendary guitarist receive his star