‘In Bed with Chris Needham’ screening 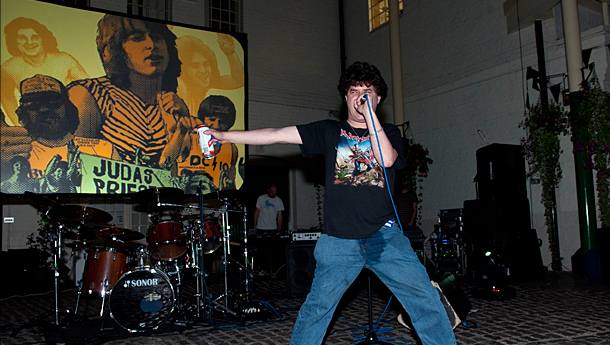 Home of Metal joined forces with 2011’s edition of Flatpack Festival to bring together an evening with Chris Needham who also did a Q&A after the screening of the now cult classic. film in which he stars.

“The plot: Chris Needham, a 17 year-old Thrash Metal fan from Loughbrough who has been absolutely lacerated by the puberty stick, is about to play his first gig with his band, Manslaughter. The problem is, they’re complete rammel. Between their first painful attempts to stand musically upright and their debut gig, Chris takes the time to defend Metal and Youth, unleashes torrents of adolescent venom upon the Green movement, ‘old bastards’, vegetarians, ‘Chart Music’, organised religion, teachers, and Neighbours, conducts a relationship with his girlfriend in excruciating silence, gets hassled by Mr Taggart and His Amazing Shirt, and goes fishing.” – Al Needham, Leftlion

During the twenty years since it was made for the BBC’s Video Diaries strand, In Bed With Chris Needham has become a cult artefact; not just for its wealth of quotable lines, but because it plugs you straight into the sensation of being a teenager at battle with the world. It’s also a window on life before social media, and a reminder that TV producers once handed out cameras to young people without treating them as performing monkeys. And of course it’s a testament to the power of metal. Unscreened for two decades – excepting youtube bootlegs – Home of Metal was honoured to have not only the full original programme, but also Chris himself in person and in conversation with Al Needham (no relation).

Taylor Parkes on In Bed with Chris Needham