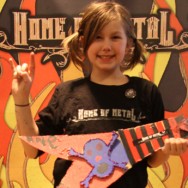 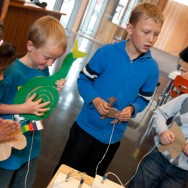 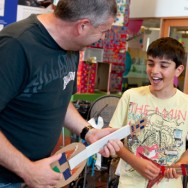 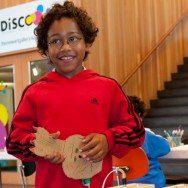 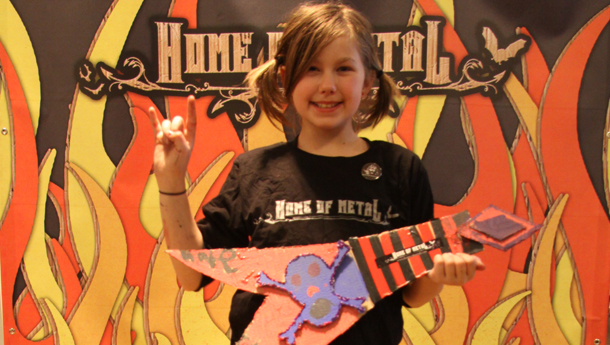 Working with highly regarded artists Juneau Projects, Home of Metal hosted a number of quality projects for families to play music, make costumes and learn something new about their hometown.

Over the Home of Metal Weekender, The Vintage Mobile Cinema parked outside Dudley Museum and Art Gallery and played host to activities which included DIY guitar making with Juneau Projects. Elsewhere throughout the day at other locations families were able to make simple musical instruments (at Wolverhampton Art Gallery) and they could also design and print their own Metal T-shirts (at Haden Hill House Museum). Children also had the opportunity to dress up as Metal Icons by donning Heavy Metal jackets , wigs and even some replica Ozzy trademark glasses. Kids could also have a dance at the silent metal disco and make their own studded wristband in Heavy Metal themed craft workshops.

Children could add their very own performance to an ongoing video shown throughout the weekend. They could also help create, paint and build Heavy Metal themed interactive sculptures with lights, sounds, and digital surprises.

Families rocked, jumped and banged their heads to their favourite Heavy Metal classics. Performances were captured and the images went directly on to a display visible to everyone during the weekend of celebrations,

Children made Heavy Metal inspired art including sculptures, painting and a giant collage.

Children could enjoy making rock star accessories, playing ‘Guitar Hero’ and dressing up as a rock star. There were also guitars and drums for the little ones to have a go at playing.

THE SOUND OF METAL at Haden Hill House

This was a free park concert featuring local bands. Children could also do rock star face painting and try out the Sandwell Foghorn Installation inspired by the metal industries of the borough.

This featured film screenings and a range of family friendly activities.

BAT OUT OF HELL BAT WALKS at Haden Hill

A bat talk followed by a walk in Haden Hill to detect the bats.

A weekend of nostalgia with music, stalls, displays, activities and fun for all the family.

Families could enjoy a blacksmithing demonstration and live music by Black Country Brass. Storytelling brought to life Bilston’s metalworking trades and all ages were able to get crafty with metal in the hands-on workshops.

Families were able to catch the Home of Metal roadshow as it pulled up into Dudley. Young musicians were on the square while a mural was unveiled dedicated to Heavy Metal music and the links to the borough’s industrial past.

Junction was the first arts festival in Chapel Ash. It showed art and music in unusual places across the area, all 5 minutes away from Wolverhampton City Centre.