Home of Metal in Botswana 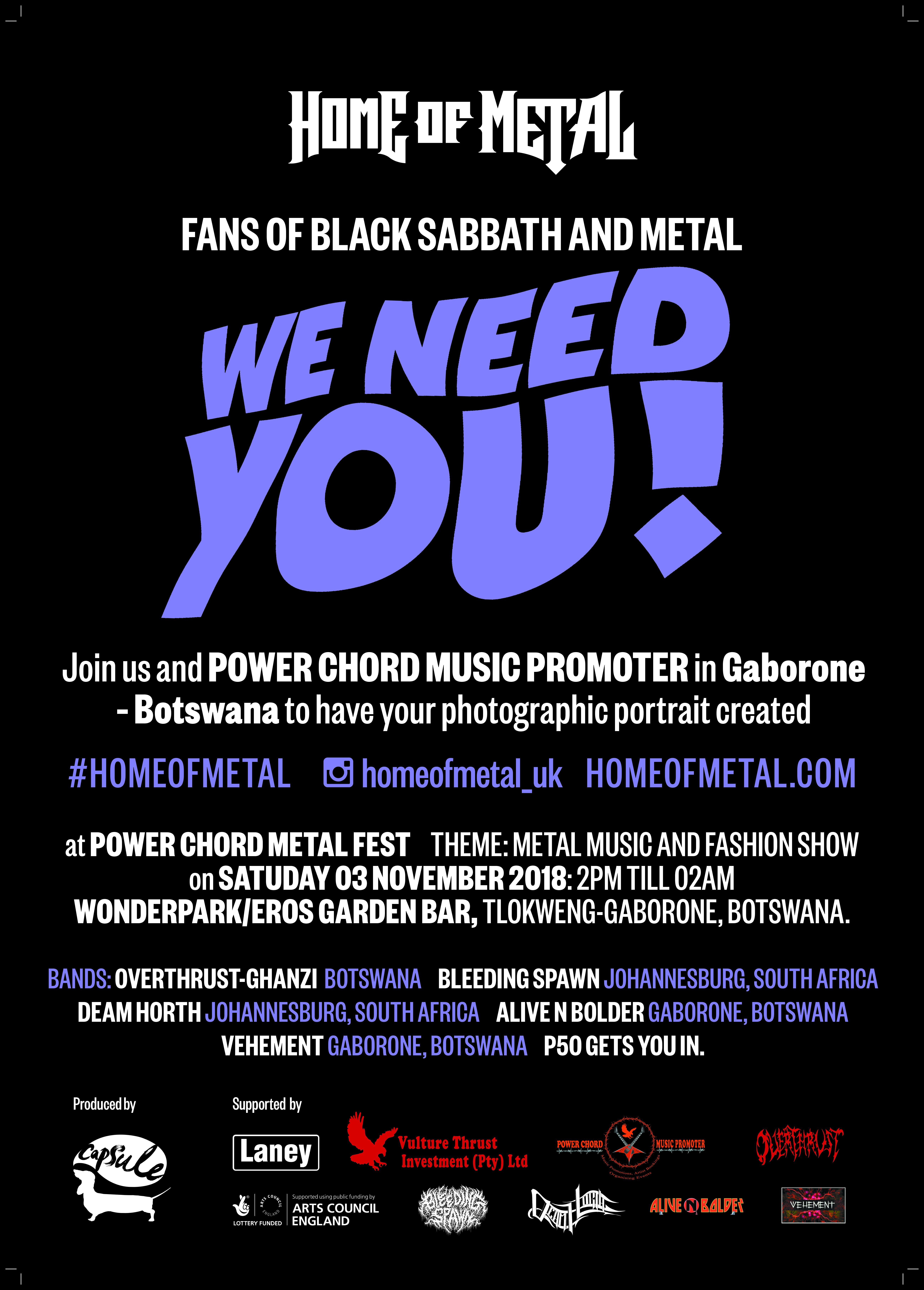 We have recently spoken to Tshomarelo Mosaka about the Home of Metal photo shoot due to take place in Botswana on 3rd November 2018.  The resulting photographs will feature
in the FANS GALLERY during late November and be part of our Home of Metal collection. 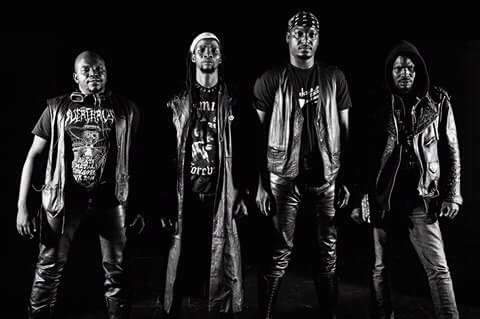 Tshomarelo Mosaka remarked  we are so happy to collaborate with you and it is an honour to work with you.
“TSHOMARELO MOSAKA AKA VULTURE THRUST ARE MY NAMES, I AM IN OVERTHRUST, DEATH METAL BAND FRONTMAN AND BASSIST. I was born in 1985 in Rakops village (Boteti Area), in Central Botswana. In am the first born in a family of 3 sisters and 2 young brothers. My father passed away in January, 2001 and we are left with our mother.  Following secondary school I enrolled with Botswana Police College and became a Police Officer, (I served in Botswana Police Service for 10 years) and resigned from Botswana Police in February 2018.

One of my biggest hobbies and my career is music, Metal and Rock N Roll.  I am the core-founder, leader, writer, composer, bassist and lead vocalist of Overthrust from Ghanzi, Botswana.  I organise metal gigs/shows around Botswana and Southern Africa.  One of the major International known metal festivals I organise is ‘Overthrust Winter Metal Mania Charity Fest’ held annually in Ghanzi, Botswana.

I started listening to rock n roll back in 1996 when I was 13 years old. I used to stay with my uncle Dudu Lesotho aka “Dux Drag D” and my cousin Maghida Gaotingwe aka
“Master Lion” in Rakops, there were hardcore old school heavy metal fans and they also played various metal songs with their acoustic guitars. I spent most of the time with them listening to bands like Black Sabbath, Iron Maiden, Motorhead, Alice Cooper, Def Leppard, Scorpions, Morbid Angel and many more.

After some years of listening to Metal and after finishing my studies in 2005 I felt I had to play an instrument, write my music and start a band. So in 2007 when I enrolled in Police College and started to work as a Police Officer, I started researching deeply about Metal music, different Metal genres, fashion and sub-culture of this genre. I had so many people who were supporting me and contributed a lot towards me starting a Metal band. Guys like Tumelo Matshameko aka “Stux Daemon” of Wrust metal band, City (Jazz artist), Pilot Pilatwe (music teacher from Botswana Prisons Band), Mr Nthobatsang aka “Ninja”, Santos of Metal Orizon band, Ivo Sbrana of Noisey Road band, Stane metal band, Remuda metal band, Ras Jesus (reggae music artist) and many others.

Masole Modise who was my squad mate at Police College in 2007 was the very first person who introduced me to guitar lessons, both theory and practical. He had attended the school of music in Pretoria-South Africa and that’s where he learnt his music. I was using his acoustic guitar that I ended up buying from him. I learnt advanced playing bass techniques more than a guitar and my main focus was on bass. I learnt to write lyrics and compose tracks.
In November 2008 I met my cousin Spencer-our Overthrust guitarist.  Spencer and I talked about starting a Metal band.  I was broke by then and so I sold my Black 1982 model 1100 cc Yamaha cruiser motorcycle and bought a 3 peace drum set, bass and guitar amps, microphone and stand, bass drum blast beat foot pedal, guitar distortion pedal, and I rented a house for our rehearsals and for Spencer to stay. Bist Thunder the drummer by then and Suicide joined us in 2009 and in 2010 Overthrust was actively playing shows, and that’s how it all started.

Through the years we have become one of the most successful Metal bands in our scene.   I have a lot of passion and love for Heavy Metal music and I learnt a lot from other Metal heads who started listening to it before me.  Despite challenges and criticism from some people, including religious people, I never gave up. I had a lot of support from my family, friends and the community.

My band Overthrust was formed towards the end of 2008 and the band became active in 2010. This band was formed by Tshomarelo Mosaka aka Vulture Thrust, Shalton Monnawadikgang aka Spencer Thrust, Gakeitse Bothalentwa aka Suicide Torment and ex-member Balang Folai aka Bist Thunder. Overthrust plays very extreme underground rock music. The themes of our songs are Dirty Deeds in Life/Purgatory, Death and False Prophets.  We recorded our single album-Freedom in the Dark in April 2011, and our 9 track debut album (Desecrated Deeds To Decease) was released in May 2015. Overthrust played many local shows including Botswana’s biggest metal shows and international shows.  We represented Botswana at METAL4AFRICA in Cape Town, South Africa in February 2013 and at GOROFEST AFRICAN CROSS COUNTRIES IN OCTOBER 2015.   For the first time we were invited by Kampnagel, an organisation in Germany, to represent Botswana and Africa in Europe (Germany and Switzerland) and we played 5 shows in 5 cities, including the world’s largest Rock/Heavy metal festival-Wacken Open Air Fest and International Summer Festival.

In 2015 Overthrust was awarded and nominated the best deathmetal band in Africa by African Metal Committee. Our influences are heavy metal music, old school heavy metal bands, like Black Sabbath, Iron Maiden, Immolation, Deicide, Cannibal Corpse and Motorhead.
We know that the UK has the roots of heavy metal for the world and there is no arguing about it.  Legendary bands that influenced world heavy metal bands are from the UK such as Black Sabbath, Iron Maiden, Judas Priest, Rolling Stones and many more, Salute to the UK Scene.
I don’t know much about Birmingham except that Black Sabbath come from Birmingham. 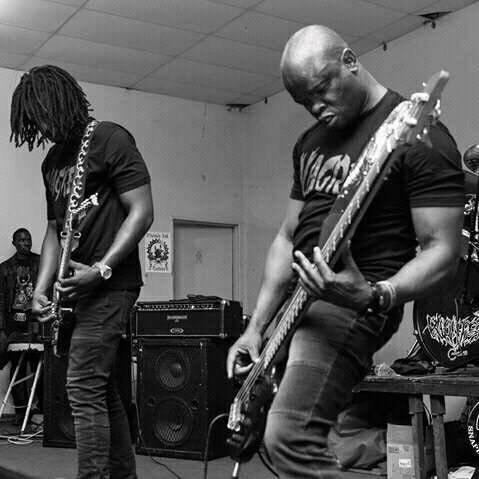 We are looking forward to the event in November with you.  We will be hosting a Metal Show under the theme: Metal Music and Fashion. This is the day to celebrate metal fashion and music, this is the day that all metalheads especially fans of Black Sabbath will be there to have their photographic portrait created and enjoy the music!

The event will be held on Saturday 3rd November 2018 from 2pm until 2am.

We would very much like to thank Tshomarelo Mosaka, his band and organisation and look forward to the event and resulting portraits of fans in November.