An Evening with Tony Iommi 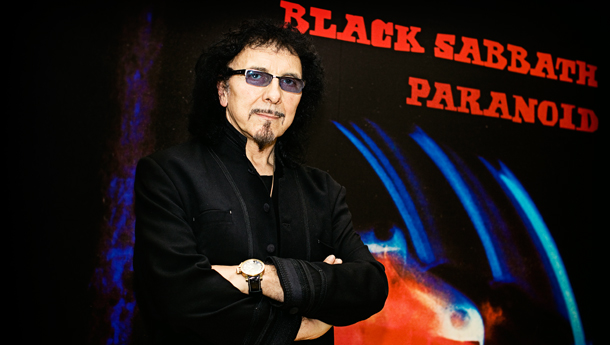 A wonderful evening at Birmingham Town Hall on Saturday 23rd June when Tony Iommi of Black Sabbath shared his stories and memories to a packed audience, including the origins of the sound, the band and its members and the incredible gigs.   Home of Metal volunteers attended and describe the evening;

Tony recounted the origins of the band’s name to an enthralled audience remarking that they started out as ‘Earth’ and because there was already a band called Earth they were booked by mistake. They played, didn’t last very long and didn’t get paid so quickly changed their name to ‘Black Sabbath’.

“Geezer: His family is catholic. He’s the clever one of the band. The name “Black Sabbath” didn’t go down well with his family.”

In the early days of rehearsals Tony was the only one driving: he had to pick up everyone to rehearse each day and with no recording equipment and never been able to read or write music they had to remember everything by heart to recount it again.

Remembering Hamburg Tony recalled that they had to play seven sets of 45 minutes each but at that time didn’t have enough songs. They steadily built an audience but were not particularly happy there and were glad to leave, even though it helped build a great follow-up being in the same club as the Beatles.

Tony described his accident that injured his hand saying that there was no consideration for health and safety at the time.   On his last day, he had to replace another worker on a machine that he had never used and he had no idea what he was doing. He went home of his lunch to speak to his mother saying he didn’t want to go back in the afternoon (couldn’t be bothered as it was his last day) but she made him go and complete his employment.  The accident happened that afternoon.   He was devastated… The doctors said he’d never play again. He tried making finger tips with melted Fairy Liquid bottles, but the tips kept slipping off. He used the leather of a jacket which worked a bit better. “I had to look at the guitar completely differently”, he said. He took the guitar apart, got banjo strings, dropped the gage down so it wouldn’t hurt him so much when he played. The sound that came out was “a racket”, now known as Heavy Metal.  Tony remarked that he was always experimenting.

“When Brian May comes to the house, I give him a Gibson and an amp [different from the one he uses] and he gets the same sound!”

Tony talked of the time that Black Sabbath visited San Francisco at the height of ‘Flower Power.’   He describes the anti Black Sabbath demonstrations there where they had to break barriers against “religious fanatics and maniacs”.  He said that witches were also attending the gig and on returning to their hotel after a gig (bearing in mind there was no security like now in hotels) they saw three women in black cloaks and candles at the end of their corridor. So the band members approached them and started singing “Happy Birthday” to the witches which must have taken them by surprise because they left.

Recounting ‘Paranoid’ Tony stated the song was called War Pigs at first. They didn’t have any songs for the album so had to come up with more. Tony was left alone in the studio to write while the rest of the band were in the pub. He came up with the riff for ‘Paranoid’, the last song, and the band ended up writing the song in 20 minutes. It is the fastest song they ever wrote and the most successful. It opened up the US market for them. Warner Brothers didn’t like War Pigs, but the UK market were even more difficult (at the time the it was all about Blues, Soul, and Pop). The album and sleeve were not accepted in the US so they had to change it.

Tony talked about how the band members liked to play tricks on each other. Tony once poured rubbing alcohol on Bill and lit it. Tony thought it would just light up and die down quickly but Bill ended up with 3rd degree burns. Bill’s mum called Tony to tell him off “so that was the end of that!”  On another occasion they were stopped by the police and had gas masks in the van. “You have to get a bit of fun on the road or you go loony. That’s what happened to Ozzy!” [joke!]

The Q&A from fans on the night included a number of great questions and recalls from Tony.

How did Ozzy come back in to Black Sabbath? They were reunited for Live Aid in Philadelphia. Live Aid was “disastrous”! They were on at 10am, having spent the night before in a bar with Judas Priest. They were all rough the next day. But they ended up doing Ozzfest.

Do you miss the crowds? “We have the best fans”

And your amazing charity work? Following the earthquake disaster in Armenia they recorded with Dave Gilmour. They then got a letter from the President inviting Sabbath and Brian May to be presented with a Medal of Honour. After what they saw in Armenia they made an album to raise money and built a music school there. Tony has recently raised £23,000 at Opus for Cancer Unit at Heartlands & Solihull. People attended from all over the world.   He also raises funds for the charity Wythall Animal Rescue.

What about the gig with Putin? Tony was asked to play at the Kremlin and was offered a lot of money for it. He didn’t want to go so told his agent to ask for double the money (hoping they’d say no and give up) but they said yes! Once there, Tony was surprised to see Putin turn up with a 30 people crew.

What is your favourite food and drink? I use to drink Guinness but now drink wine. At first, the band used to go for Fish and Chips or curry after gigs or rehearsals, but they spent all their money on gigs.

How’s your health? He feels ok but still goes to check-ups.

What’s your favourite album? I like them all. (maybe the first one or Sabbath Bloody Sabbath)

Tony’s friendship with Brian May: What to look for? “We might get together when Brian has the time”. They’ve been friends since 1972. His 2 best friends in the business are Brian May and Eddie Van Halen.

If you weren’t in Black Sabbath, what band would you be in? A blues band. John Mayall and the Bluesbreakers maybe.

Who were you listening to when Earth started? Blues bands. The Shadows to start with. He also likes Jazz and Doris Day. Django Reinhardt, Frank Sinatra.

What was it like to play with Led Zepplin? “They came in the studio, we had a jam, it was a row!” John wanted to play Supernaut. “There must be tapes around somewhere”

What was so special about Mothers in Erdington? It had a vibe that didn’t exist anywhere else. Big names played there.

Will Black Sabbath ever play again with the original members? “It would be possible. I don’t know.”

Is Geezer the healthiest? He’s a vegan, he lives in California. He’s doing a bucket list tour: going to Italy, driving to NY etc

What song do you wish you’d written? ”I’m happy with what I’ve written!”

Would you do another solo album? “I don’t know”. Would like to do one with Brian May, or work with Rob Halford. He likes doing different things. He liked working with the Birmingham Cathedral choir. He met the Dean in a Pub. There were fans in the pub who wondered what was going on (given the Dean’s attire).

Did you consider living permanently in the US? I lived there because I worked there but missed my friends.

What’s next? Tony can’t stop and do nothing.